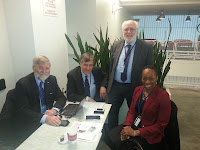 This week I have been attending the 47th session of the Commission on Population and Development at the United Nations in New York. I have been working with SPUC's veteran lobbyists, Pat Buckley (pictured standing in the photo) and Peter Smith (sitting). We have been joined this week by the redoubtable Obianuju Ekeocha, pictured with us, representing Culture of Life Africa.

The ugly, anti-life agenda has been all too evident this week here at the United Nations. The gloves are off and war is being waged against the unborn, marriage, children and the family. The pro-abortion lobby - which is out here in force - is being led by the likes of Lynne Featherstone on behalf of the British government - Parliamentary Under Secretary of State for International Development. I will say more about that another day.


"This meeting has to be viewed through the lens the original Cairo Conference on Population and development (in 1994) during which an uneasy balance was reached between the radical western sexual rights agenda and the more generally accepted societal norms for life and family issues.

"Tragically, the Cairo agreement, twenty years ago, has never stopped the anti life lobby from endeavouring to implement their complete agenda of sexual and reproductive rights, which includes, amongst other things, abortion on demand, comprehensive sexuality education for children and adolescents and acceptance of every form of same sexual practice plus same sex marriage.

"It has become clear during the conference that the International Planned Parenthood Federation (IPPF) has been targeting some of the small Caribbean and Pacific Island States in order to promote their radical sexual agenda. Many of these small Island nations from Kiribati, to Fiji, the Cook Islands, Tuvalu, and Papua New Guinea, suddenly began speaking up for the first time and became abortion and sexual rights activist countries overnight."

Pat tells me: "The population and 'sexual rights' lobby don’t care about the real needs of small Island Nations and developing countries. All they seem to care about is advancing their sexual rights agenda".