With, perhaps, unconscious irony, the British government announced last week "A New Act is Born" - a law designed to kill millions of innocent human beings deliberately created never to be born.
"A New Act is Born" is the headline given to the press release published by the Department of Health announcing that the Human Fertilisation and Embryology Act had received Royal Assent.
The government release goes on to explain:
"Human-admixed" embryos created from a combination of human and animal genetic material, purely for laboratory research will be allowed and strictly controlled. There will be a 14 day limit, after which the embryo must be destroyed. Sex selection of offspring for non-medical reasons is banned. Sex selection is only allowed for medical reasons - for example to avoid a serious disease." [And, of course, embryos with the wrong sex will be destroyed] ... And there are many other clauses designed to harm or kill embryos created in the laboratory. 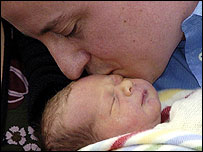 It's appalling that our country is led by a politician who voted for abortion up to birth for disabled three times, as did his predecessor Tony Blair, and that his main rival for the job of Prime Minister, David Cameron, has said that disabled babies should continue to be aborted up to birth, even though he and his wife have a disabled son themselves.
Please consider joining SPUC's campaign in your area - or starting such a campaign - to alert constituents as to how your MP voted in the defining issue of the 21st century, the treatment of the most vulnerable members of our community, newly-conceived human embryos. Contact me at johnsmeaton@spuc.org.uk if you want to run or join such a campaign in your area.
at 12:39