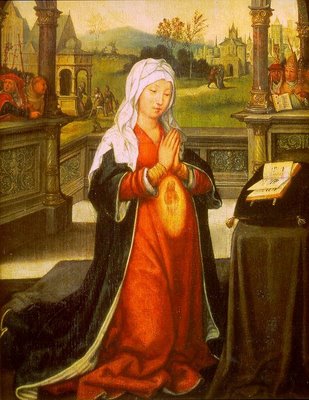 Catholics celebrate today the feast of the Immaculate Conception. This feast celebrates the Catholic teaching that Mary, Jesus' mother, was conceived free from original sin. Pictured is a representation of St Anne, Mary's mother, pregnant with Mary. (Some Catholics on the SPUC HQ staff attend Mass on weekdays at the nearby St Anne's church).

As we know from science, in normal human reproduction pregnancy begins with the conception of an embryo through fertilisation in the fallopian tube. Pro-abortionists claim that killing newly-conceived embryonic children after fertilisation but before implantation in the womb is not abortion. They claim that pregnancy doesn't start until implantation, and they make this claim in order to exempt the morning-after pill from laws restricting abortion. The American College of Obstetricians & Gynaecologists even went so far as to redefine not just pregnancy but also conception, declaring that: "Conception is the implantation of the blastocyst. It is not synonymous with fertilization."

Such shameless shifting of the goal-posts is a commonplace tactic of the anti-life lobby. Unfortunately some Catholics, anxious to compromise with the secular world, have adopted this false thinking. Yet, as Dana Rosemary Scallon, the former Irish politician, reminded Irish voters in the 2002 abortion referendum, Catholics celebrate the feast of the Immaculate Conception, not the feast of the Immaculate Implantation!

The British government's providing access to children with abortion and abortifacients and preparing them for sexual activity is the worst development in Britain since the passing of the Abortion Act. Citizens whose children attend both faith and non-faith schools must resist the wicked government policy which robs our children of their innocence and which kills our grandchildren. The government's proposals for compulsory sex education, if not blocked, will result in a massive promotion of embryo-killing drugs and devices in schools, including Catholic schools.

It is therefore incumbent upon the Catholic Education Service (CES) in England and Wales to reverse its general support for compulsory sex education. The CES should also stop welcoming Connexions into Catholic schools. Connexions is a government agency which is committed to giving schoolchildren, under the age of 16, access to abortion and abortifacients without parental knowledge or permission. Connexions' advisers are trained to tell young people that they can obtain abortion and abortifacients without parental knowledge or consent.

I suggest that on the feast of the Immaculate Conception, Catholics make reparation for the CES's complicity in the government's anti-life/anti-family agenda by reading and responding to SPUC's campaign alert.