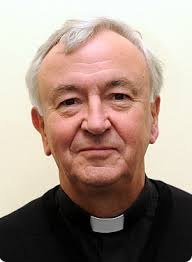 As a Catholic parent, living in the archdiocese of Westminster, I am troubled by the BBC's Hardtalk interview with Vincent Nichols (pictured), the archbishop of Westminster, broadcast last Friday. I am troubled for my family. Not for the first time, we've been abandoned by our pastor. Equally, I'm troubled for Pope Benedict who, in his forthcoming trip to Britain, is being shepherded into a politically correct "broad church".

I pray that the state of episcopal leadership in England and Wales is brought to the attention of the Pope and that the Holy Father determines to speak out boldly and unambiguously about abortion, contraception and on the authentic truth of human sexuality, just as he does elsewhere in the world.

Archbishop Nichols showed his mastery of the political art of evading direct questions - until it came to exchanges on whether, in the future, the Catholic Church might accept "flexibility" on matters like gay unions. At the same time he speaks about "fidelity to Christ" and "faithfulness". I publish below a verbatim transcript of one section of the interview with the archbishop.

It reminds me of the Catholic bishops' position on abortion. On the one hand they explain the Catholic church's opposition to abortion. On the other hand, Archbishop Nichols and the Catholic bishops of England and Wales go along with the previous government's ideas and legislative plans on sex and relationships education - which involve giving access to schoolchildren under the age of consent to abortions, without their parents' knowledge or consent. The previous government's plans and ideas also included teaching that homosexuality is normal and harmless.

As a consequence of this dichotomy the Catholic Church in England and Wales, in particular its teachings relating to the culture of life, is wounded and divided. I pray that Pope Benedict will heal these wounds and division with love and forthright teaching.

I will return to this dichotomy between faithfulness/fidelity to Christ, the bishops of England and Wales, and abortion etc for schoolchildren later this week and its implications for non-Catholics and the Catholic faithful later this week. Here is a verbatim transcript of one section of Archbishop Nichols's interview on Hardtalk below.

"Stephen Sackur (S): Let's look at some specific issues then... Not so long ago on a visit to Africa, Pope Benedict said that in his view the distribution of condoms can aggravate and does aggravate the problem of HIV Aids. Now there are no scientific polls on this but I would suggest to you that most people in a country like the United Kingdom would fundamentally disagree with that position.

Archbishop Vincent Nichols (N): Yes I would agree with you and I think that most people in this country would disagree with it.

S. Do you disagree with it?

N. No. I don't actually. I wouldn't express it like that.

S. You think that condoms aggravate the problem of the spread of HIV Aids?

N. No, I wouldn't express it quite like that. What I would say is that the spread and the use of condoms in Africa have plenty of champions and still Aids spreads. So I think there are deeper questions that we should be asking and when you ask those questions, for example from the perspective of women in Africa, then you've got to say "Actually we should be looking for an understanding of sexuality that is something that isn't just contained within a technical response. I think the distribution of condoms is a technical response from a western technological cuture being imposed on a society which doesn't work like that.

S. But when you tell me that I cannot help thinking back to the interview I recorded for this programme not so very long ago with the Catholic bishop of Rustenburg, Kevin Dowling, and for him condoms was anything but a technological debate. He says that in his particular diocese he has decided that condoms are a crucial part of the healthcare alternative offered to women because he says they save lives and more than anything else he is pro-life and being pro-life has led him to believe that he has to challenge his own Pope on this fundamental issue.

N. Well I respect his views. He's been there. I've never been to Africa. That's why I would be cautious in expressing the view precisely on this point in practical terms. The point I was trying to make was the point that we can engage in a debate about in this country which is what is the meaning of human sexuality. What actually is it about? Is it a recreational activity? Is it a casual relationship activity? It is something intrinsically involving procreation? How exactly do understand human sexuality? And these are the underlying questions which I think the Pope provokes which many people find uncomfortable but nevertheless are very valid.

S. But I just wonder whether you sometimes feel uncomfortable because on the one hand your Catholic faith and your belief in the Pope and this Pope in particular leads you to a position where you want to be loyal. Loyalty is a fundamentally important part of the Roman Catholic tradition. On the other hand maybe from time to time like Bishop Dowling you believe that this Pope or any particular Pope takes a stand that you can't share. How do you wrestle with that personally?

N. Well I think we start off here by wanting say, and this would be my most fundamental commitment, would be a search for truth, a search for what actually helps me to know who I am, what my destiny is, what my deeper origins are, what is going to make sense of this myriad of experiences that make up a daily life. And I think the church is misunderstood when the Church is represented as saying we possess the truth and from here on we'll give it to you. And Pope Benedict would never say that. He would say and I would try and echo that we are searchers for the truth. We want to be possessed by the truth - not possessive.

S. But your perception of the truth may be different from his. For example in 1986 the famous letter he wrote on homosexuality in which he described homosexual acts as intrinsically and objectively disordered. Do you in your view of truth and searching for truth disagree with that?

N. Well again you have to understand the language. That's a technical language that draws on scholastic philosophy for over a thousand years and what it ...

S. (interrupting) But Archbishop When you say that you're probably losing a large part of the audience. People want to know from a senior churchman like yourself.

N. Well let me tell you what it means. It means there here is an understanding that human sexuality is to do with procreation and sex between two people of the same sex will never produce a child.

S. And is therefore unnatural.

N. ... Therefore it is not along the line of the order, the pathway, of sexuality as understood in this tradition.

S. You see you will know as well as I do there are social trend surveys in the United Kingdom and many other western developed nations which suggest that on issues like the view of homosexuality the general population is getting more and more "liberal"

S. And yet you and the Pope are sticking to a deeply traditional, small "conservative" line. Therefore the disconnect between the general population and the Roman Catholic church appears to be getting wider. Does that not worry you?

S. There'll be nobody in the pews.

S. And let me first just quote [to] you, sorry to interupt but it is important, the Pope in his letter to Irish Catholics in which he expressed great remorse for what happened in Ireland going back to the child sex abuse scandals. He said and I'm quoting his words now: "Fast-paced social change has occurred often affecting peoples' traditional adherence to Catholic teaching and values." The Pope himself surely recognises there is a problem here and is the Chruch not going to have to respond to it?

N. Well let me quote the Pope back to you in 1986, I think it was, as a theologian he said he could foresee the day when the church in some parts of the world had shrunk so much that it would become a small flock.

S. He used the word "remnant"

N. Yes he probably did. That's a very biblical expression. So he's not ... afraid of that. He would put fidelity over success so the criteria we're here for is not success.

S. You say he's not afraid of becoming "a remnant" he would put orthodoxy, loyalty, purity

N. No, no a search for truth

S. OK so maybe purity of theology before ...

S. The Church of England for example in this country is taking a rather different view. They believe there has to be some flexibility. The church has to be a reflection of society's values to a certain extent and therefore we see women priests, women vicars, and there's obviously in some parts of the Anglican Communion, women bishops.

S. Some of their vicars are also prepared to sanction gay unions. That church is showing flexibility. Is the Catholic church not going to have to do the same eventually?

N. I don't know. Who knows what's down the road?

S. Well I'm just asking you. You're rather an important player in the Catholic church. What do you believe it should be?

N. No no. There's no doubt in my mind that our first call is to faithfulness and not to sucess. And if faithfulness involves that kind of shrinking then so be it. But it's not as if the church has policies and then focus groups then tries to re-shape so that it captures the mood of the day or the wind and therefore gets momentum behind it. That's not simply the way the Catholic Church understands itself.

[*] Pope John Paul II taught that it was an illusion to think that we could build a true culture of human life if we did not offer adolescents and young adults an authentic education in sexuality, and in love, and the whole of life according to their true meaning and in their close interconnection. However, with the bishops of England and Wales lending its support to legislation that obliges Catholic schools to provide information on contraception and abortion, is it not completely unrealistic to expect that Catholic sexual morality will be taught in these schools?