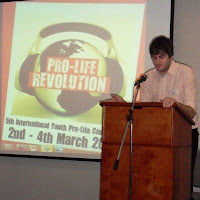 This evening is the first evening of SPUC's 5th international youth pro-life conference, which this year is being held in Rotherham, south Yorkshire. Pro-life youth have come from all parts of the United Kingdom and from European countries, including Spain, Malta and even the Faroe Islands! There is a great camaraderie not only between the young delegates but also between the youth and SPUC's conference staff.

This evening featured a viewing of "Sophie Scholl: the final days", about the White Rose anti-Nazi student group whose leaders were tried and executed in 1943. (See my blogs of 22 February 2008 and 17 December 2008 about the link between the White Rose group and SPUC's work today). Sam Sheridan-Garrity (pictured) from SPUC Rotherham introduced the film, saying:


"Tonight's film is from a time in our recent history when human dignity was not respected. It tells us that when a small voice speaks the truth it can speak very loudly."

Two lines spoken by the Sophie Scholl character in the film stood out for me:


"Every life is precious"

Only this week we have witnessed great bravery in defence of life and conscience by two Scottish midwives fighting to uphold their right not to be complicit in abortion.

I truly believe that the young people gathering at this weekend's conference are the future for our world. Conversations I'm having with young people here from universities and elsewhere the length and breadth of Britain are informing me about an extraordinary new networking in this generation of pro-lifers, the like of which I've not witnessed in 38 years in the movement. Despite the darkness of the culture of death threatening to envelop us, "the sun is still shining" (in the words of Sophie Scholl in this evening's film).