Fr Kosmas, the "rubbish baby", is on fire for the unborn child 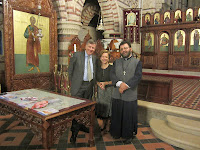 Fr Kosmas, the priest who hosted my talk on abortion at the Greek Orthodox Cathedral in Birmingham last night, was nicknamed "the rubbish baby" by his grandmother who had defended his right to be born. I am pictured (right) with Fr Kosmas Pavlidis, and Liliana Malla, the chairman of the Ladies Committee at the Cathedral, who organized the event at Fr Kosmas's request.

After I spoke, Fr Kosmas told the meeting the moving story of his family and of his birth in poverty in Greece 51 years ago. He was the fourth of four boys. His father had no work and he told Fr Kosmas's mum when she was pregnant for the fourth time: "We can't afford another child. You will have to take care of the situation."

Fr Kosmas's mum did not want an abortion - and his maternal grandmother was also strongly opposed. However, eventually his mother reluctantly agreed and her husband took her to a local hospital for the abortion - where he left her because he didn't like hospitals. Whilst waiting on her own for the appointment, she made up her mind not to go ahead. She went home and told her husband she had taken care of the situation - only telling him the truth a couple of months later when the secret could be kept no longer.

Fr Kosmas was born. His father accepted what had happened; and his grandmother never let her daughter, his mother, forget, that "This was your rubbish baby" - whilst confidently predicting that Kosmas would become a priest!

Fr Kosmas's simple story made a big impression on everyone, particularly his parishioners who had never heard it before.

The Orthodox tradition and Orthodox values have a huge amount to teach us in how to engage with modern society. As His Holiness Kirill, Patriarch of Moscow and All Russia, says in Freedom and Responisbility:


"Modern society is constantly inculcating into people that religious faith is a purely private, indeed intimate affair of the human individual ... Personal ethics do indeed lie at the very heart of Christian morality. The Christian message is aimed in the first place at the individual person, seeking to elicit a personal spiritual experience and response which will open the way to the transfiguration of his or her soul. Nonetheless, these salvation-bringing changes in our inner worlds take place not in isolation from the external environment, not in special laboratory conditions, but in real and living contact with the people around us: in the first instance in our families, then with our colleagues at work, with society and, ultimately, with institutions of State. It is not possible to be a Christian inside the walls of one's own home, in one's family circle or in the solitude of one's cell and to cease to be Christian when teaching at university or in school, standing in front of a television camera, voting in Parliament or undertaking a scientific experiment".

Patriarch Kirill's words were particularly relevant for that part of my talk which addressed the powerful political and social forces, internationally and nationally, seeking to destroy conscientious objection on abortion and on other right to life issues. I cited Orthodox teaching taken from Bases of the Social Concept of the Russian Orthodox Church which states (XII.2):


"Sin also lies with the doctor who performed the abortion. The Church calls upon the state to recognise the right of medics to refuse to procure abortion for the reasons of conscience."

and I referred to the General Medical Council's new draft guidance for doctors on Personal Beliefs and medical practice.

This latter document is so significant and, potentially, dangerous in relation to conscientious objection, I shall return to it very shortly on this blog. In the meantime, go to the home page of SPUC's website, whether or not you are a health professional, to find out what you can do.

Suffice it to say, the growing closeness between, and the shared values of, those in the Orthodox tradition and the worldwide pro-life movement are crucially important in the development of our work. In this connection, I pointed out at Birmingham Orthodox Cathedral last night the following extract (XII.3) from the teaching document I cite above:


"Among the problems which need a religious and moral assessment is that of contraception. Some contraceptives have an abortive effect, interrupting artificially the life of the embryo on the very first stages of his life. Therefore, the same judgements are applicable to the use of them as to abortion."

Fr Kosmas, the "rubbish baby", was on fire last night for the unborn child. He told me that his grandmother had played a key role - influencing his mother - in saving his life. He said that the pro-life movement needs everyone - the old as well as the young - to pitch in, to speak out, and to save lives.

May his fire continue to spread.