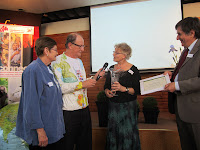 Gillian Foster, representing the co-ordinating committee of SPUC Evangelicals, and I, had the privilege of presenting a "pro-life hero" award to George Verwer in south-east London yesterday. We made the award at a very special occasion celebrating 50 years of George's ministry in Operation Mobilisation, in the presence of hundreds of  his co-workers. Gillian, second-right, presents the award to George who asked Drena, his wife, to join him for the ceremony.

George Verwer is the Founder and former International Director of Operation Mobilisation (OM), which is a ministry of evangelism, discipleship training and church planting. George led OM for over 40 years before stepping down in August 2003.

George has a burning concern for vital, propagating and revolutionary Christianity in his own life and in those he meets. In George's modern version of the parable of the Good Samaritan, he includes the unborn in his list of seven groups of people lying at the side of the road and he challenges Christians not to ignore them. Through OM, George distributes free of charge tens of thousands of books and DVDs about the unborn around the world.

Even yesterday, when hundreds of George's co-workers in Operation Mobilisation came together to celebrate his 50 years of service to the OM mission, George Verwer was unafraid to challenge those present who may favour abortion to re-think their position. "We're not judgding you", he said - and he openly wept for his own failure to speak out for the unborn earlier on in his Christian ministry.

George continues to travel around the world preaching about Christ and about seven people lying at the side of the road which include: children at risk, abused women, the extreme poor, the HIV/Aids patient, people with impure water, the unborn, and the environment. Here's what George was saying in 2006 about the unborn:


Some estimates put the number of children who have been aborted at 500 million. The numbers are staggering, and in many ways I would rather ignore them. But I know that I cannot. I confess, when my close friend Dr. Francis Schaeffer decided to put so much effort into the pro-life movement towards the end of his life, I thought he had gone a little extreme. I no longer feel this way, and repent of my own inaction. In some countries there are more abortions than births, and the laws in some nations allow abortion until the day before birth. How can this be?

With so much abortion taking place, let us not consider it a lost cause and give up. No, many battles have been won, and every battle is a victory; every saved life a real person. I believe that there are thousands alive today who otherwise would not have been without pro-life action. Are not these saved lives worth the effort? Yes, they are!

So let us be people of vision, action and especially grace - grace for the mothers, for those in the pro-choice camp, and for fellow Christians who disagree. Recommended reading: Why Pro Life? by Randy Alcorn"

As Jan Bell, Chairman of SPUC Evangelicals, put it in her letter accompanying the award:


"For a number of years now we have been appreciative of your support for SPUC and for SPUC evangelicals in particular. You have been and are a good friend to pro-life activists and to the unborn who have no voice of their own ... We can assure you that you will continue to be in our prayers and we trust that god will continue to use you further. We know he will bless you for your diligence in proclaiming the gospel in all its fullness."

As Gillian Foster and I travelled back home from south-east London yesterday we felt privileged to have presented such a richly-deserved award to, and to count as a friend of SPUC, a humble Christian leader who's prepared to speak up for the unborn in season and out of season.