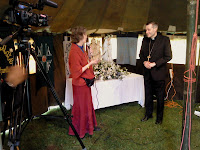 Bishop Mark Davies, the Roman Catholic bishop of Shrewsbury, has responded sharply to Nick Clegg, the UK's deputy prime minister, who said he could not understand why people of faith regarded the legalization of homosexual "marriage" as a matter of conscience.

Bishop Davies was speaking in Walsingham, the Marian Shrine, at the annual pilgrimage of the National Association of Catholic Families (NACF). Walsingham has been a Marian shrine for almost a thousand years and was one of the greatest shrines in medieval Christendom. Mrs Maria Hayne is pictured above introducing Bishop Davies at a previous NACF Walsingham.

Bishop Davies said in his address at Walsingham today:


“The Deputy Prime Minister was recently reported as saying he could not understand why Christians and other people of faith saw a legal redefinition of marriage as a matter of conscience: it would not, he claimed, impinge on religious freedoms. Experience, of course, might make us cautious of such assurances, even those given by a Deputy Prime Minister, that this agenda will not threaten religious freedom.

“However, our concern is not only with religious freedom but also the enormous good which marriage represents as foundational to family-life. Today we see a government, without mandate, disposing of any credible consultation, seeking to impose one of the greatest acts of ‘social engineering’ in our history in uprooting the legal definition of marriage. Marriage lies at the very foundation of the family.

“For all generations to come one generation of politicians sets out to demolish in the name of an ‘equality agenda’ the understanding of marriage that has served as the timeless foundation for the family. The Government is seeking to do this at the very moment when marriage as an institution has been more weakened than ever before. Yet it asks: why are people of faith concerned?”


“So far from weakening and confusing the foundation of the family we invite our political leaders to give back to the institution of marriage and the family the recognition and confidence it deserves.”

The NACF is an association of Catholic families who give one another mutual moral, spiritual and social support in today's culture which is so threatening to our Catholic family values.

SPUC's concern regarding the government's plan to legalize homosexual "marriage" is to protect real marriage because real marriage, as the life-long exclusive union of a husband and wife, protects unborn children and helps families to flourish. Marriage is not owned by the state – it belongs to mankind.