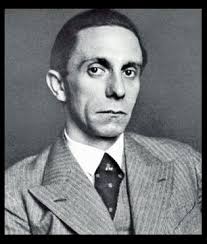 In a news story today, AFP (Agence France-Presse) promotes the extraordinary claim that there are between 473,000 illegal abortions and 800,000 illegal abortions annually in the Philippines, a country which has a constitutional ban on abortion (and a strong bishops’ conference constantly speaking out against abortion). That would mean that the Philippines has something approaching three times the abortion rate of the UK where virtual abortion on demand has been lawful for over 40 years. (The AFP report appears to be a blatant media effort to promote a "reproductive health" bill which, I reported recently, has totalitarian and coercive elements)

Anyone who’s travelled to the Philippines, as I have on several occasions, and has witnessed first hand the love of the family and the natural abhorrence of abortion in that country, would immediately recognize here the Nazi propagandist Joseph Goebbels [pictured] principle at work: “If you tell a lie big enough and keep repeating it, people will eventually come to believe it”.

Similar outrageous claims about backstreet abortion have recently been made about Northern Ireland, as I’ve blogged recently.

It should be noted that the WHO is one of the world’s major pro-abortion bodies. For example, it encourages the provision of abortion facilities in refugee camps. A document produced by the WHO states that camps should:

“where elective abortion is legal, establish links with an appropriate health care facility (Type II health centre for first trimester, district hospital for first and second trimesters). If no such facility is available, consider training staff on-site in the provision of manual vacuum aspiration (MVA) for first-trimester abortion (however, see footnote*) …

“* … Given the particularly sensitive nature of this aspect of reproductive health, it is vital to be aware not only of the legal position within the host country, but also whether there is likely to be violent opposition from within the refugee or displaced community. Opposition to services is looked at in Section A, Chapter 3, and Section C, Chapter 9.”

The source for AFP’s reference to 473,000 induced abortions in the Philippines is the Guttmacher Institute, a body supported by the World Health Organization, the UNFPA, Planned Parenthood of America – and many other major pro-abortion institutions. [The AFP report gives the source as UNFPA]

Former abortionist Bernard Nathanson, recently repeated the admission made in his book "Aborting America": "We claimed that between five and ten thousand women a year died of botched abortions," he said. "The actual figure was closer to 200 to 300 and we also claimed that there were a million illegal abortions a year in the United States and the actual figure was close to 200,000. So, we were guilty of massive deception."

The deceptions once practiced, but now renounced, by Bernard Nathanson are alive and well in the work of the Guttmacher Institute and the World Health Organization and in today’s AFP report on the Philippines.
at 23:07