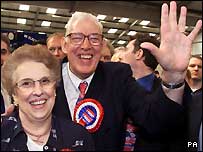 Addressing the House of Lords last November, Baroness Paisley, wife of the former First Minister of Northern Ireland (pictured together), said: “Northern Ireland will not be bullied by political activists whose ideas and actions have brought about the massacre of more than seven million innocent unborn children in the years that this [Abortion] Act has been in operation...”
Such sentiments, however, don't stop Diane Abbott, MP for Hackney North and Stoke Newington, believing that she can impose the Abortion Act on Northern Ireland despite the fact that, in addition to Baroness Paisley, Northern Ireland's devolved Assembly, 90% of its elected representatives and all four main Churches in the Province, have told Ms Abbott and her colleagues that they don't want Britain’s abortion law.
“No-one in Northern Ireland voted for Diane Abbott, Evan Harris or any of the other pro-abortion extremists in Parliament and yet these MPs seem to think they are our colonial masters and that we must do as they say,” Liam Gibson, SPUC’s Northern Ireland organizer, said to me.
Ms Abbott claims that she wants equality for women in Northern Ireland but she adds insult to injury to the long-suffering people there when she tells the media that women in the Province are “facing conditions more reminiscent of the 19th century,” and that “[m]ost working-class women must take their chances with the backstreet abortionist.”
In reality, the maternal mortality rate in Northern Ireland is the lowest in the UK.
Is it possible that Ms Abbott actually believes her own propaganda? Interestingly, she did not make these claims to the media within Northern Ireland where she could easily be challenged. If anyone in the English press asked her to prove what she said about backstreet abortions in Northern Ireland she would be unable to find any evidence to justify her claims.
“Diane Abbott knows nothing about the women in Northern Ireland and it’s also clear that she doesn’t give proper attention to the standards of healthcare for women in her own part of the UK,” Liam Gibson said to me. “If she did, she would notice that the abortion law in Northern Ireland not only provides more protection for unborn children, but also helps to safeguard the health of women.”
People in England, Scotland and Wales should write to their MPs to tell them the truth about Northern Ireland and call on them to stop Diane Abbott and her colleagues from imposing their anti-life values on the people of Northern Ireland.
at 06:28