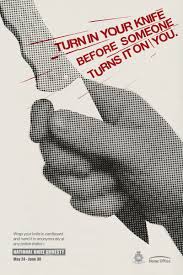 This morning a Google UK search provides over 11,000 news references to knife crime. The first two headlines from Times Online and the Press Association read "Brown commits to immediate action on knife crime" and "PM pledge over knife crime measures".

Today's knife-crime news and questions about the causes of violence in Britain (and its solution) bring to mind Mother Teresa's speech on 3rd February, 1994, at the National Prayer Breakfast in the US, in Washington DC - attended by President Bill Clinton and Hillary Clinton, the first lady.
Mother Teresa said:

"Many people are also concerned about all the violence in this great country of the United States. These concerns are very good. But often these same people are not concerned with the millions who are being killed by the deliberate decision of their own mothers. And this is what is the greatest destroyer of peace today - abortion which brings people to such blindness."

Peggy Noonan, best-selling author and columnist for The Wall Street Journal and present at the prayer breakfast, described the audience's response, including the reaction of Bill and Hillary Clinton, in an article in Crisis magazine:

"Well, silence. Cool deep silence in the cool round cavern for just about 1.3 seconds. And then applause started on the right hand side of the room, and spread, and deepened, and now the room was swept with people applauding, and they would not stop for what I believe was five or six minutes. As they clapped they began to stand, in another wave from the right of the room to the centre and the left. But not everyone applauded. The president and first lady, seated within a few feet of Mother Teresa on the dais, were not applauding. Nor were the vice president and Mrs. Gore. They looked like seated statues at Madame Tussaud’s. They glistened in the lights and moved not a muscle, looking at the speaker in a determinedly semi-pleasant way."

I'm sure Gordon Brown is entirely genuine when he says: “

The terrible stabbings that have occurred this week are shocking and tragic and my thoughts are with the families and friends of those who have been hurt or killed in these attacks".

In saying such things the Prime Minister expresses the thoughts of virtually everyone in the UK; and if Gordon Brown were to discover the cause of this epidemic of violence and begin to address it, his premiership will go down in history for this reason and he will be well remembered by the British people.
I believe that what Mother Teresa said in 1994 about violence in the United States applies equally to the situation in Britain today; and I believe that if Gordon Brown begins to see the mistake he (and Parliament) made in voting for legalised abortion, in vitro fertilisation and destructive embryo research - and thus completely undermining respect for the sacredness of all human life - he will have discovered the greatest destroyer of peace in Britain and the biggest cause of knife-crime.
Now that debate and voting on pro-abortion amendments to the Human Fertilisation and Embryology Bill have been delayed till the autumn by the government, pro-life leaders and church leaders should waste no time in echoing the words of Mother Teresa:

"...this is the greatest destroyer of peace today, abortion...".

Tony Blair, Bill and Hillary Clinton have never repudiated their pro-abortion positions and the worldwide consequences of their policies have been catastrophic. Even one small step for Gordon Brown, using his Government's influence to stop a complete meltdowon on respect for unborn life in Britain, could prove to be a giant leap for humanity.
at 06:30