Extreme pro-abortion MPs at Westminster have launched a bid to impose abortion on Northern Ireland. MPs for five English and one Scottish constituency have tabled an amendment to extend the 1967 Abortion Act to Northern Ireland, via the government's Human Fertilisation and Embryology bill.

"This attempt to impose abortion on Northern Ireland is extremist, anti-democratic and arrogant. The move flies in the face of the will of the people of Northern Ireland who have, through their elected representatives in both Stormont and Westminster, continued to say no to abortion. The leaders of all four major political parties and the four main Churches right across Northern Ireland's traditional divide have written to both the government and all Westminster MPs calling on them to allow the issue of abortion law to be decided by the Province's devolved government.

"None of the MPs who've tabled this amendment represent anyone from Northern Ireland. Dr Evan Harris is notorious for his anti-life extremism, and John Bercow has tabled another amendment launching a witch-hunt against pro-life pregnancy counselling services. Diane Abbott [pictured] misled listeners of this morning's Today programme by claiming that the law on abortion in Northern Ireland is stricter than in the Republic of Ireland.

"This amendment is a desperate attempt by the most extreme members of the anti-life lobby to legalise abortion on demand ahead of the devolution of criminal justice matters to the Northern Ireland Assembly. 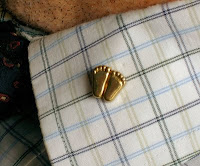 "SPUC is calling on everyone opposed to the Abortion Act being forced on Northern Ireland to make their opposition public by wearing the Little Feet lapel pin showing the feet of an unborn baby at 10 weeks. This is an international symbol of solidarity with unborn children. Anyone in Northern Ireland can order Little Feet lapel pins for free by contacting SPUC's Belfast office on 028 9077 8018.

SPUC is also asking for volunteers to flood the Province with thousands of leaflets explaining the effect of abortion on unborn children and their mothers," said Mrs Gibson.

The MPs for the five English constituencies are Diane Abbott, Dr Evan Harris, John Bercow, Jacqui Lait, and John McDonnell, and the MP for the Scottish constituency is Katy Clark.
at 12:37