“Keep sex out of science lessons” was the key message from a demonstration of parents outside Arnhem Wharf Primary school in east London, organised by Tower Hamlets Parents' Action Group – SRE, and supported by SPUC Safe at School.

80 parents (pictured - click photo for high resolution) gathered outside the school between 2-3pm yesterday at exactly the time when Year 6 children inside the school were being shown sexually-explicit images in a science lesson from which their parents were unable to withdraw them.


"All primary schools are required by law to teach every child the scientific aspects of human reproduction; which includes naming the body parts and reproduction.

"We would like to reassure parents the subject is taught with sensitivity, according to guidelines and its content is constantly reviewed. At Arnhem Wharf Primary School it is taught to pupils from Year 5 – those aged at least nine – not children aged five, as some parents had been led to believe.

"There is a wealth of evidence that demonstrates how useful young people find such education and Ofsted recently warned that a lack of high-quality, age-appropriate sex and relationships education (SRE) may leave children vulnerable to inappropriate sexual behaviours and sexual exploitation.

"Our schools are aware that this is a sensitive subject and they consult with parents regularly, providing copies of the teaching material in advance. The vast majority of parents fully welcome the teaching of SRE and recognise the vital role it plays in their child’s education. For example, only three of the 120 children in Years 5 and 6 at Arnhem Wharf have been withdrawn by their parents from the non-statutory elements of SRE. We would urge anyone with concerns to hold a constructive meeting with their headteacher."

Commenting on the statement Antonia Tully of Safe at School told the media today:


"Tower Hamlets Council have got this wrong. There is nothing in the primary National Curriculum for Science which mandates schools to teach children at Key Stages 1 and 2 about sexual organs and sexual intercourse in humans. Teachers are interpreting the curriculum to mean this.

Many parents in Tower Hamlets have read the national curriculum for themselves and they are quite clear about this.

The new draft National Curriculum was published earlier this year. There were some important changes to the science curriculum at Key Stage 1. In the new draft curriculum, non-statutory notes and guidance at Key Stage 1 contains a list of body parts children need to learn. This list does not include the sex organs. The notes also indicate that sexual intercourse is not to be covered at this stage.

The Tower Hamlet Parents' Action Group never suggested that children as young as five were receiving sexually-explicit science lessons. The child at the centre of the controversy which prompted the demonstration is Anisah Alam who is in Year 6.

I challenge Tower Hamlets Council to produce the 'wealth of information that demonstrates how useful young people find such education'. Our research shows quite the opposite. The Council may wish to look at Wiggins M, Bonell C et al., 'Health outcomes of youth development programme in England, prospective matched comparison study.' (BMJ 2009; 339:b2534). This landmark study showed that delivering intensive sex education to young teenagers resulted in 3.5 times as many girls getting pregnant than in the control group. This sort of study does not suggest that teaching children in primary school about sex will result in delayed sexual activity.

I would also like to point out to Tower Hamlets Council that over 10,000 local people, mainly parents, signed a petition last year objecting strongly to the presence of the sexually-explicit teaching programme, the Christopher Winter Project, in Tower Hamlets Schools. This is the resource that was being used on the afternoon of 26 June in Arnhem Wharf Primary School.

The continuing complaint of parents in the borough is that they are unable to have 'a constructive meeting with their headteacher'.  One headteacher admitted to parents that she knew she didn't have to teach sex in science lessons, but that she wanted to.

There is total confusion surrounding the National Curriculum for science at Key Stages 1 and 2. The Government needs to issue an urgent statement to Local Authorities about exactly what must be taught."

Also pictured are this summer's SPUC interns who attended and assisted at the protest: 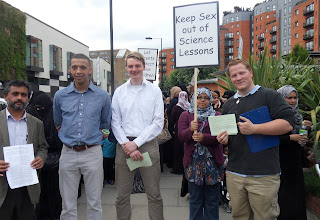