Tony Blair "did not strictly follow the Catholic line" on abortion! says Our Faith on Sunday 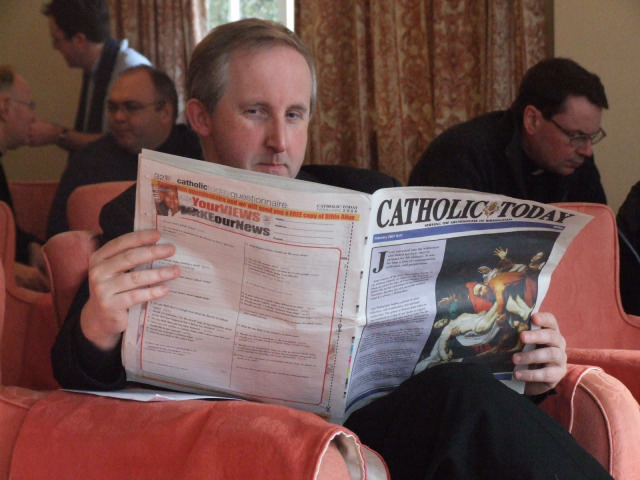 Many Catholic parish priests reproduce reflections entitled "Our Faith on Sunday" on the reverse side of their weekly bulletins. Fr Stephen Boyle (picture right), parish priest of The Good Shepherd, in New Addington, Surrey, contacted me to ask for my comment about this week's edition - on the feast of the Visitation.

This Sunday, the author of "Our Faith on Sunday" refers to Ann Widdecombe MP's "begrudging comment" about Tony Blair's reception into the Catholic church and to her concern that Mr Blair had not strictly followed the Catholic line on a variety of issues in his voting record as Prime Minister, most notably on abortion.

"Not strictly followed the Catholic line?" Frankly, that's putting it mildly - and a lot more mildly than Ann Widdecombe rightly put it.

In my letter to Tony Blair (11th January 2008) on behalf of the Society for the Protection of Unborn Children, I wrote:

We would...be most grateful if, in the light of your reception into the Catholic Church, you would tell us if you now repudiate:

• voting in 1990 for abortion up to birth three times during Parliamentary debates on what became the Human Fertilisation and Embryology Act 1990;
• personally endorsing your government’s policy of supplying abortion and birth control drugs and devices to schoolgirls as young as 11 without parental knowledge or consent;
• your government introducing legislation which has led to a lawii which allows, and in certain circumstances requires, doctors to starve and dehydrate to death vulnerable patients;
• your government’s commitment to the promotion of abortion on demand as a universal fundamental human right.
• personally championing destructive experiments on human embryos."

In the case of an intrinsically unjust law, such as a law permitting abortion or euthanasia, it is therefore never licit to obey it, or to 'take part in a propaganda campaign in favour of such a law, or vote for it'*.

"Our Faith on Sunday" finishes by suggesting that insisting that politicians have a moral obligation to vote to make abortion illegal "could be counter-productive".

I encourage Catholics who read "Our Faith on Sunday" to write to the author to ask the following question: If Tony Blair had voted for laws permitting the killing of Catholics or Jews or people from ethnic minorities or lethal experimentation on them, would Catholics be right to expect him publicly to renounce such laws and to repudiate his role in passing such legislation before being received into the Church? Is it counter-productive to insist that politicians like Tony Blair vote to make such killings illegal?

By the way, what a way for "Our Faith on Sunday" to celebrate the feast of the Visitation, when the unborn St. John the Baptist leapt for joy in his mother's womb - greeting the unborn Jesus Who may not even have implanted in the lining of Mary's womb! Jesus may have been the same age as the embryos upon whom lethal experimentation is carried out under the Human Fertilisation and Embryology Act for which Tony Blair voted in 1990 - and which he continued to champion shortly before being received into the Catholic church.