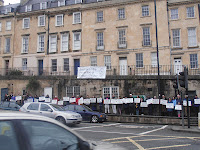 Below is an upbeat report from Fr Bill, O.S.M., a parish priest and university chaplain in Bath, of SPUC's Pro-Life Chain last weekend in Bath:


"There was a brave SPUC presence in Bath – thirty-five + seven children – silently witnessing on Saturday 28 April along with countless others up and down the land. It rather resonated with the escape on Saturday from house arrest of the Chinese dissident Chen Guangcheng  a self-schooled legal activist who is known for revealing rights abuses under China's one-child policy and has accused officials in Shandong province of forcing 7,000 women into abortions or sterilisations. How quickly abortion moved there from an encouraged action to an obligation enforced by the political power of the State.

SPUC ‘s annual Pro Life Chain Day on Saturday 28 April at 11am to 1.00pm - marking the 44th Anniversary of the implementation of the Abortion Act -  saw SPUC supporters standing with courage at the London Road Junction (where it adjoins Cleveland Bridge) Those witnessing silently were safe from traffic and passers by. The signs ... included a helpline number. Gail Mills, chairman of Bath and Wansdyke SPUC group, was heartened by the presence of a very good number on a rainy morning.

Gail said she had been a little anxious about an imagined 100 opponents who were said to be coming to give 'a drubbing' to the pro-lifers after much incitement in the local paper and radio publicity. In the event only a small opposition group of 12 turned up who tried to oppose ...

Gail expressed grateful thanks to all who supported SPUC with their prayers, time, and encouragement and especially the priests of the Bath Deanery who were supportive of SPUC’s efforts. Gail can be contacted along with the Bath SPUC group on 01225 833224. Be a voice for the voiceless!"