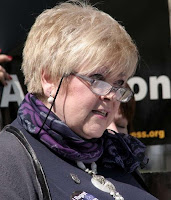 A harrowing story of a young Romanian girl raped, it is said, by her uncle was reported by AFP on Friday. A medical ethics panely has, reportedly, examined her and decided that "abortion should not be imposed" for certain legal reasons.

This young girl is only 11 years of age. It's said she did not know that she was pregnant and that her parents only found out by accident when she was given a medical after suffering stomach pains. Rape by an uncle is, it's reported, suspected but not proven. Margaret Cuthill of BVA, an experienced Post Abortion Trauma Counsellor of 20 years, said “If indeed the young girl has been raped, then performing an abortion on her would be akin to a further assault on her young body. It seems she has not had any say in what has been happening to her at all, and that the adults in her life are making all the decisions for her. In my experience those who have had late abortions in their teenage years are the most psychologically damaged.”

This is borne out by The Elliot Institute in America who recently published the following statistics relating to teenage abortion:-

For these reasons and others I will be joining Margaret in appealing to the relevant authorities in Romania to stick to their decision and not to "impose abortion" on this young girl.