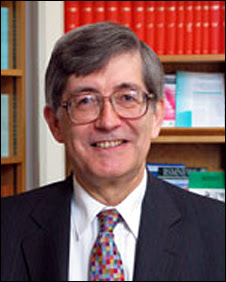 Yesterday I blogged about pro-abortion amendments to the Human Fertilisation and Embryology Bill to de-restrict abortion up to 24 weeks and to empower midwives and nurses to perform abortion - and the urgent action needed to oppose these amendments.

Today we read that Professor Nicholas Wald, director of the Wolfson Institute of Preventive Medicine, has been honoured by the United Kingdom for his work of identifying disabled people before they are born in order to kill them. Here's what Alison Davis, who has spina bifida, and who leads No Less Human, a division of SPUC, says about the award:
"Prof. Wald's award, for developing pre-natal tests whose sole aim is to identify disabled babies in the womb so that they can be aborted, is hardly an achievement in the eyes of disabled people. This is not 'prevention' of disability, as he maintains, and as his job title suggests, but direct and deliberate eugenic killing. It is ironic that simultaneously Prof Wald has developed the use of folic acid in pregnancy which can reduce the chance of the baby having spina bifida by 72%. He seems to see no distinction between preventing a baby from having a disability, and killing a baby because s/he has a disability. He clearly has no understanding at all of the value and dignity of people like me with disabilities. This award is highly offensive to all who live with disabling conditions, but particularly those who have conditions which he has spent his life trying to eradicate by abortion. That he is to get an award for work that directly led to killing so many who would otherwise have grown up to be like me is adding insult to injury."
at 12:49