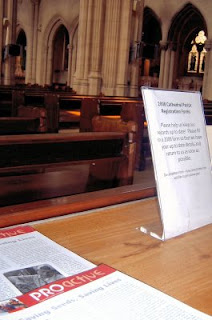 As a Catholic, now that our offices have moved south of the river, I have started going to St George’s Cathedral, Southwark, for Mass whenever I can. On a recent visit, I noticed newsletters on display from Progressio, the working name for the Catholic Institute for International Relations (CIIR).
On Progressio’s website, they describe themselves as "an international development charity working for justice and the eradication of poverty", combining “a heritage of radical Catholicism and secular thought." Reflecting on its history, Progressio claims that after the Second Vatican Council (1962-5) "there was a clear division within the church between the progressive and the more conservative elements" and that "CIIR's then education department supported the progressive elements of the church in various liberation and human rights struggles in Central America, southern Africa and Asia. CIIR published booklets on liberation theology and promoted progressive church speakers."
64% of Progressio's funding comes from the British government – the Department for International Development, which the website links to ”with grateful thanks”. Catholic Action UK has compiled a dossier on Progressio’s work. Whilst some of the issues raised do not fall within SPUC’s remit, it makes sobering reading…

…Not quite so sobering as the spring 2008 issue of Progressio’s own publication Interact, in which a development worker working with Progressio’s partner La Dignas writes of her desire to make a documentary about ‘the serious consequences of the total criminalisation of abortion’ in El Salvador.
By the sound of it, this documentary won’t share the sentiments of a pro-life petition signed by every one of the 84 lawmakers in the El Salvador Congress. "Every human being should be protected and respected from the moment of conception…until his natural death," the petition reads. "Our primary responsibility as legislators is to unconditionally defend life. We condemn abortion as an abominable crime." Possibly Progressio’s principal funders, the British Government, which promotes abortion on demand worldwide, would have something to say about it if the documentary adopted the same line as El Salvador’s lawmakers!
Progressio's position on the abortion law in El Salvador is ambiguous to say the least.
Not only is Progressio being promoted among worshippers at St George’s Cathedral, Southwark, it is listed in the Catholic Directory under “International/Third World Catholic Agencies”. Catholics have a right to expect agencies that claim any connection with the Catholic Church to uphold the Church’s teachings on sexuality and the sanctity of life. Agencies that fail to do so have no place looking for support in a Catholic cathedral.
at 17:48