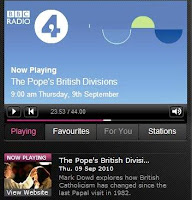 Mark Dowd this morning presented a programme on BBC Radio Four entitled "The Pope's British Divisions". Among many other people, he interviewed two schoolchildren and a priest from Nottingham diocese. The two schoolchildren, from St Benedict's school, Derby, will meet Pope Benedict next week as part of a special delegation of Catholic youth.

The first schoolchild confirmed she was “a practising Catholic” and was asked what she would like to say if she meets the Pope. She replied:


"I don’t think [the Pope] quite understands that we’re in the 21st century yet, and I think that some of his views are still quite outdated, things that he’s said about abortion and same-sex marriages."


“Do you think it’s possible to be a Catholic and to be pro-abortion and in favour of same-sex marriage?”


"Yeah, I think it is. I know I certainly am, and I don’t have a problem admitting that and being a Catholic.”

The second schoolchild referred in a negative tone to:


“the best thing about being a Catholic is the fact that you can pick and choose which bits you’d like to believe in, as long as you worship God.”

The priest interviewed was Fr Joe Wheat, director of youth services in the Nottingham diocese, who said:


“You talk to 50 young people who would refer to themselves as Catholic and you’ll get 50 different versions of Catholicism, which is brilliant. It’s fantastic actually."

Mr Dowd put it to Fr Wheat that:


"A lot of the students we spoke to [at St Benedict's school, Derby] mentioned contraception, abortion, homosexuality. Can they, in your view, maintain views which are contrary to Church teaching but still call themselves a good Catholic?"


"Depends what your measure of ‘good’ is when you say ‘good Catholic’."

Fr Wheat certainly has, let us say, strange ideas. On the Nottingam Diocesan Catholic Youth Service website, he numbers Tony Benn, the anti-life/anti-family retired politician, among the "living person[s] he most admires"; and says he would invite K.D. Lang, the entertainer and homosexualist activist, to his "dream dinner party."

I therefore dread to discover what on earth is being taught to Catholic young people in Nottingham diocese about the sanctity of human life and the meaning of human sexuality - but I will be writing immediately to Malcolm McMahon, the bishop of Nottingham, to find out. I have blogged before about Bishop McMahon's openness to headteachers being in same-sex unions.* He is the current chairman of the Catholic Education Service (CES) which welcomed and helped draft anti-life and anti-family sex and relationships education under the previous Labour government. Under his chairmanship, the CES appointed as its deputy director Greg Pope, a former Labour MP with a lengthy anti-life and anti-family parliamentary record.

Vincent Nichols, archbishop of Westminster - and Bishops McMahon's predecessor as CES chairman - was also interviewed by Mr Dowd. Archbishop Nichols was asked about the regular provision of Masses for a homosexual group in a central London parish, and the equally regular protests by faithful pro-life/pro-family Catholics against that provision. Archbishop Nichols said:


"anybody from the outside who is trying to cast a judgement on the people who come forward for Communion [there], really ought to learn to hold their tongue."

Yet this totally ignores the evidence that the Soho Masses are organised by and for Catholics who dissent from the Church's teaching on homosexuality, as I blogged recently.

As one of the protestors explained:


"According to God's law, sex is to be used within the context of marriage, [but w]e know from speaking to some of [the Soho Mass attendees] in the past that they have a platform whereby they are proposing that there are other areas in which sexuality can be used and that they themselves believe that to be in order."

This testimony was borne out by a lesbian attendee at the Mass, who told Mr Dowd:


"[Here] you don't have to explain yourself, here I just feel a total sense of acceptance about that area of my life."


"Why do you keep church up at all if the Church says that your orientation is a tendency to an intrinsic moral evil?"


"A large proportion of the Church don't go along with that .. I feel intrinsically Catholic."

Last Peter Marshall of BBC's Newsnight interviewed some other Soho Mass attendees, in a programme to be broadcast at 10:30 this evening. Here is some of what they told Mr Marshall:
Was Archbishop Nichols listening when Pope Benedict told the English and Welsh bishops, on their most recent ad limina visit, to:


"recognize dissent for what it is, and not to mistake it for a mature contribution to a balanced and wide-ranging debate. It is the truth revealed through Scripture and Tradition and articulated by the Church’s Magisterium that sets us free."?

Pro-life families must demand that the Catholic bishops of England and Wales stop providing cover for individuals and groups who are actively undermining Catholic Church teaching on abortion, contraception and homosexuality. Families seeking to protect their children from such bishop-protected open dissent must not hold their tongue. For as Pope Benedict said yesterday, Catholic


"principles, faithfully maintained, above all when dealing with human life, from conception to natural death, with marriage - rooted in the exclusive and indissoluble gift of self between one man and one woman ... are necessary conditions if we are to respond adequately to the decisive and urgent challenges that history presents".

Comments on this blog? Email them to johnsmeaton@spuc.org.uk
Sign up for alerts to new blog-posts and/or for SPUC's other email services
Follow SPUC on Twitter
Join SPUC's Facebook group
Please support SPUC. Please donate, join, and/or leave a legacy
at 17:51