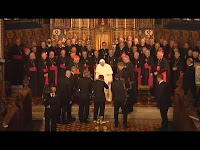 In yesterday's public address to the English and Welsh bishops, Pope Benedict said:


"As you proclaim the coming of the Kingdom, with its promise of hope for the poor and the needy, the sick and the elderly, the unborn and the neglected, be sure to present in its fullness the life-giving message of the Gospel, including those elements which call into question the widespread assumptions of today’s culture." [my emphasis]

We should be aware that Pope Benedict, in the midst of the frenzy stirred up by a hostile media, crafted much of his words in the language of diplomacy. Observers of the language of diplomacy, however, look out for what may be called the "iron fist in the velvet glove", where a rebuke is veiled in subtle terms. To me it seems clear that Pope Benedict's words are a strong hint to the bishops of England and Wales that he knows that they have failed to preach and teach, fully and unadulterated, the Gospel of Life and the Truth and Meaning of Human Sexuality (by which I mean both those doctrines and the Vatican documents of the same name).

For example, on the very weekend that Pope Benedict arrived in Britain, a headline in The Catholic Herald read:

reporting on Archbishop Vincent Nichols' comments (not once, but twice) that the Catholic Church may accept and recognise homosexual unions.

Thankfully, in the same edition The Catholic Herald published a letter by Mrs Dominie Stemp of East Sussex, which read:


"[It is] disturbing [that Archbishop Nichols is] unsure about whether gay marriages will be accepted by the Catholic Church. Our archbishop seems to have been swept up in the culture we live in and his eyes can no longer see the reality of the situation."

Many faithful pro-life/pro-family Catholics are today riding high on the successes of the papal visit: the unexpectedly large crowds, the absence of large protests, the praise for Pope Benedict from the otherwise usually sceptical commentators. The elation, however, must be properly directed, so that people's critical faculties are not suspended and so that they are not thus led into naivety. The energies loosed by the papal visit must be directed towards revitalising pro-life/pro-family activism, for which Pope Benedict explicitly called during his visit to Britain.