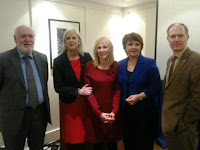 Ireland United for Life is an alliance of over thirty cross-community groups, together with Dana Rosemary Scallon and Kathy Sinnott, both former members of the European Parliament (MEPs). Today the alliance held a press conference in Dublin at which they said:


"[W]e can and will only vote for parties and individual candidates who publicly pledge commitment to defend human life at all stages and we urge all concerned voters to do likewise."

To that end, they have called upon all political parties, party leaders and election candidates to sign the following pledge:


"to defend human life at all stages, from conception until natural death and that if elected - :

Grave concern was expressed at the Labour Party threat to introduce abortion if it forms part of a future government.

I totally endorse the message of Ireland United for Life. I also urge readers to scrutinise closely any election-time messages on pro-life issues - especially any emanating from the Catholic bishops of Ireland - for any deviations from the upholding of the absolute protection for all unborn children, inside or outside the womb, guaranteed by the Irish Constitution.

Comments on this blog? Email them to johnsmeaton@spuc.org.uk
Sign up for alerts to new blog-posts and/or for SPUC's other email services
Follow SPUC on Twitter
Join SPUC's Facebook group
Please support SPUC. Please donate, join, and/or leave a legacy
at 16:44