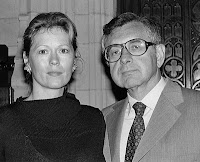 Dr Bernard Nathanson, the most famous of those abortionists who became pro-life, has passed away, aged 84. Please pray for the repose of his soul, and give thanks to God for his decades of pro-life witness. His writings, speeches, documentaries and other work following his pro-life conversion give testament to a great mind and a faithful Catholic.

Dr Nathanson came several times to the UK at the invitation of SPUC. He spoke at our national conferences at Swansea in September 1984 and at Glasgow in 1986, at which he presented "Eclipse of Reason", the second of his documentaries into the reality of abortion. In Novemeber 1984 he presented "The Silent Scream", the first of his documentaries, to a meeting of parliamentarians at the House of Commons. He is photographed here in Parliament with his wife, Adele. Over the following decades SPUC sold or distributed many copies of his documentaries and books.

"The Silent Scream" includes an ultrasound scan of an abortion of a 12-week unborn child. The documentary was endorsed (see affadavit, right) and defended by Professor Ian Donald, who is universally acknowledged as the father of ultrasound. It was through the use of ultrasound in abortions, which Dr Nathanson had pioneered, that the full humanity of all unborn children was revealed to Dr Nathanson's conscience.

During a decade of transition from being pro-abortion to being pro-life Dr Nathanson recalled that he:


"had performed many thousands of abortions on innocent children [and experienced] existential torment...unremitting black despair...[considered suicide and abused] alcohol, tranquilizers ... I despised myself ... I had become as Hannah Arendt described [Adolf] Eichmann [an architect of the Holocaust]: a collection of functions rather than an accountable human being."

Anthony Ozimic, SPUC's communications manager, wrote in 2005 a dissertation on the subject of abortion centre staff. Commenting on Dr Nathanson's recollections, he wrote:


"It is truly telling that both the pioneer of mass abortion (Bernard Nathanson) and the woman who case made mass abortion possible in the US (Norma McCorvey) - who herself went on to work in a clinic – suffered negative effects on their moral character because of their abortion work. They had a choice to follow those negative effects further into a downward spiral or transform into moral regeneration, and they chose the latter."

So I thank our Lady of Guadalupe, protectress of the unborn, for the pro-life conversion and pro-life witness of the late Dr Bernard Nathanson. Requiescat in pace

Comments on this blog? Email them to johnsmeaton@spuc.org.uk
Sign up for alerts to new blog-posts and/or for SPUC's other email services
Follow SPUC on Twitter
Join SPUC's Facebook group
Please support SPUC. Please donate, join, and/or leave a legacy
at 15:22