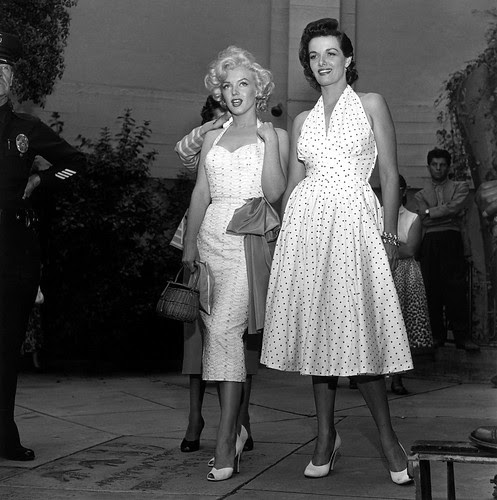 Jane Russell, the Hollywood film star of the 1940s and 50s, has died aged 89. Best-known for her beauty, her opposition to abortion is also widely noted in today's obituaries. As a 19-year old, she resorted to an illegal abortion, which almost killed her and which left her infertile. She's pictured (right) with Marilyn Monroe (whom it is claimed was also left infertile by abortion). Rather than conclude from the experience that abortion should be legalised, she rejected abortion, saying:


"People should never, ever have an abortion. Don't talk to me about it being a woman's right to choose what she does with her own body. The choice is between life and death."

Her family has asked that, instead of flowers, mourners send donations to her local pro-life crisis pregnancy centre.

Jane Russell is not the only celebrity to have stuck out her neck by making comments in support of unborn children or the dignity of motherhood, for example:
So let's pray that more people in the entertainment industry will be encouraged to speak out in support of life and family and not discouraged by attacks from the culture of death.

Comments on this blog? Email them to johnsmeaton@spuc.org.uk
Sign up for alerts to new blog-posts and/or for SPUC's other email services
Follow SPUC on Twitter
Join SPUC's Facebook group
Please support SPUC. Please donate, join, and/or leave a legacy
at 16:56