No pro-life leader will match Dr Jack Willke's worldwide educational impact: May he rest in peace! 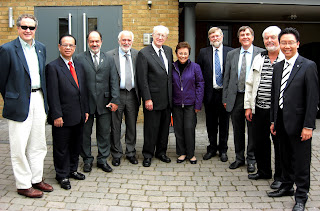 Pictured above left to right in September 2009 at SPUC's London office are:
Dr Jack Willke, the father of the worldwide pro-life movement, who died last Friday, has been a friend and collaborator of SPUC's for over 40 years. He was 89. May he rest in peace.

To understand something of the full significance of Jack's life and work - shared by Barbara his beloved wife - read the obituaries in the National Review Online, and the Washington Post.

No other pro-life leader or organisation will match the solid educational work done by Jack and Barbara Willke through their books and lectures. And for virtually the whole of their active pro-life service, they did it without the aid of the worldwide web.

Their title Handbook on Abortion, the New York Times tells us, sold a million and a half copies - and there were so many other titles besides ... Other significant publications included: Abortion and Slavery, History Repeats and Assisted Suicide & Euthanasia, Past & Present and they co-authored six other books on human sexuality which have been translated into 30 languages. Five years ago they had clocked up 87 countries in which they had lectured ... and rising ... He also broadcast on 400 radio stations - one-minute pro-life messages in a programme entitled "Life Jewels". Jack was a pro-life marketing genius. Brad Mattes, his successor (see below) has kept up this remarkable broadcasting output since Jack stepped back a few years ago. His legacy is alive and very well.

SPUC's presentation in schools, albeit updated with the latest research and delivered with the aid of all that modern technology provides, is fundamentally based on the Willke slide presentation which I personally watched them present in The Philippines, in the UK, in Kenya and elsewhere.

I had the honour of serving as joint vice-president of International Right to Life Federation, with Jim Hughes, Canada's Campaign Life Coalition national president, during the final years of Jack's presidency - now succeeded by Brad Mattes who also succeeded Jack as president of Life Issues Institute.

During Jack's visit to the UK in September 2009 (see picture above), Jack delivered a message of hope to SPUC's national conference in which he said: “We must keep doing what we’re doing. It’s slow but we shall win in the end.” One could not lose the argument, he said, when one advanced the case that abortion killed babies.

On behalf of my colleagues in SPUC, and our thousands of supporters, I sent heartfelt condolences and a promise of prayers to Jack's family, his six children and 22 grandchildren. May he rest in peace.