They are not afraid! The Nigerian pro-life movement awakens

When I was asked by the co-founder of Culture of Life Africa, Obianuju (Uju) Ekeocha, to attend the International Pro-life & Family Conference (hosted by the Catholic Ecclesiastical Province of Ibadan, Nigeria), I didn’t know what to expect, but I knew I wanted to be there.


Uju is effectively living a double-life: by day, she is a Specialist Bio-Medical Scientist in the UK, by night, she is a pro-life activist, having meetings with pro-life leaders and doing radio and television interviews to defend the traditional culture of life in Africa. In her spare time, she is campaigning and pushing against anti-life giants to keep Nigeria, and the rest of Africa, free from their clutches.


Uju’s pro-life mission began when she penned an open letter to Melinda Gates, who was hosting a conference in London which focused on spreading contraception to the 69 poorest countries in the world, most of which were in sub-saharan Africa. Since then, she has campaigned all over Africa, in the UK and at the UN to keep African parents and their babies safe from Western plans to limit their families (or even better, to have no families at all) 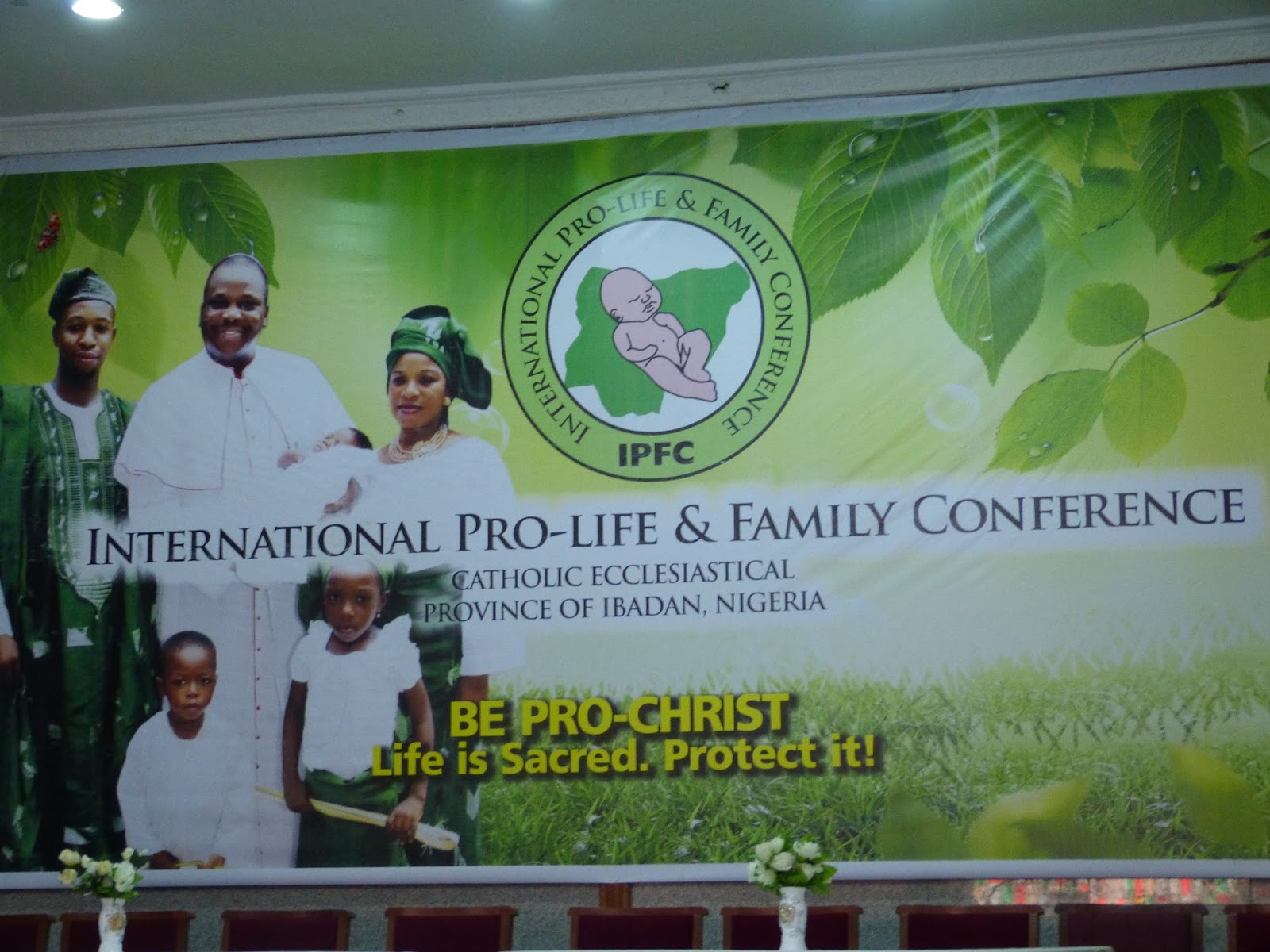 Nigeria is currently at the centre of a battle where Western organisations are desperate to export abortion, contraception and the full acceptance of homosexuality (and all that entails) to countries where these things are currently illegal and rejected by the population in general. Organisations like the UNFPA are even recruiting Nigerian people to spread this message ‘from the inside’. Brian Clowes of Human Life International, who spoke at the conference in Ibadan, speaks of the “colonisation of the mind”. This is where organisations seek to destroy the traditional pro-life, pro-family mind of the targeted people and make them eager to participate in their own mass absorption into the culture of the coloniser.

This conference was called to educate and inform faithful Nigerian Catholics in how to battle against these organisations, equipping them with knowledge of the dirty tactics that will be used and the techniques and ideologies which are being proposed. The Nigerian Catholic bishops recognise that they must lead the Catholic faithful in this fight (read the conference resolutions).


This year was the third pro-life conference to be held in Nigeria, but the first in Ibadan. I was not sure what to expect, but whatever I was expecting, it was not on this level.

Some 1,500 Nigerian Catholics (and some Muslims) had travelled from all over Nigeria to attend the two-day conference. When we arrived at the conference centre, we were greeted by four bishops and the Archbishop of Ibadan: Archbishop Gabriel Abegunrin.


The following day, we listened to talks on every aspect of the pro-life fight, from Uju’s keynote address, C-FAM’s Wendy Wright, whose title was ‘Resisting the Rising Tide of Sexual and Reproductive Health and Rights’, Msgr. Paschal Nwaezaepu’s excellent overview of aggressive reproductive technology to Prof. M.C. Asuzu’s talk on Secular Humanism. I couldn’t believe the standard of speakers (including our very own Antonia Tully, speaking on sex education in schools) and the positive reaction from those listening and taking notes.


What struck me more than anything throughout the day was the consistent emphasis on the need for action. This was the message from all the bishops and all the speakers, especially the Nigerian ones: those who attend the conference must not hear the truth, be told of the threats to their country and their culture and then return home and do nothing. This cannot happen because the consequences of inaction at this stage are too serious.


We cannot all travel the world or appear on television, but we can all be a witness in our own families and communities, we can all pray for the protection of human life, we can all write letters, vote for politicians who are committed to protecting life, raise our children to be pro-life and ensure they are not being taught evil at school. This is exactly the message which I would give to any pro-lifer in any country, but to hear it from a bishop or a professor is so much more powerful.


What I also heard were stories from people such as Jerry Okwuosa, Director General of the Project For Human Development (PHD). They describe themselves as “a not-for-profit NGO which promotes family values, the dignity of the human person, authentic rights of women and children, the dignity of labour and other pristine values which form the substructure for the building of our national values”. These are the kind of people who have been holding the fort since the 1970s, when attempts were first made to legalise abortion in Nigeria. Jerry regaled us with stories of tracking down illegal abortionists who would run away once they saw him coming, of walking into pharmacies and asking as loudly as possible where they kept their contraception because he knew they would be the shame of the village when it was found what they were selling.

It was not all happy stories though. The fact is that abortions happen in Nigeria, and they are not rare (although we do not have figures, since they are all illegal abortions and therefore undocumented). Uju told us that she knows there are illegal abortion centres run by Marie Stopes International in both Lagos and Abuja, but nothing is done to stop them.


On the second day of the conference, we took part in a huge March for Life through the town of Ibadan, around the area surrounding the university.

This lasted about two hours and, as far as I know, there were the same number of people (around 1,500 people) on this march. Everyone was full of energy, holding banners, playing instruments, chanting and singing. I saw in some pictures afterwards that there were even some people carrying small caskets.

Some people were even running up to those standing on the street to challenge them on abortion, contraception and homosexuality. They are not afraid!


It was extremely humid but nobody seemed to care as they danced up the street and sang “Yes yes to life, no no to death” with Bishop Badejo and Archbishop Abegunrin leading them. There was an overwhelming feeling of joy on the march. 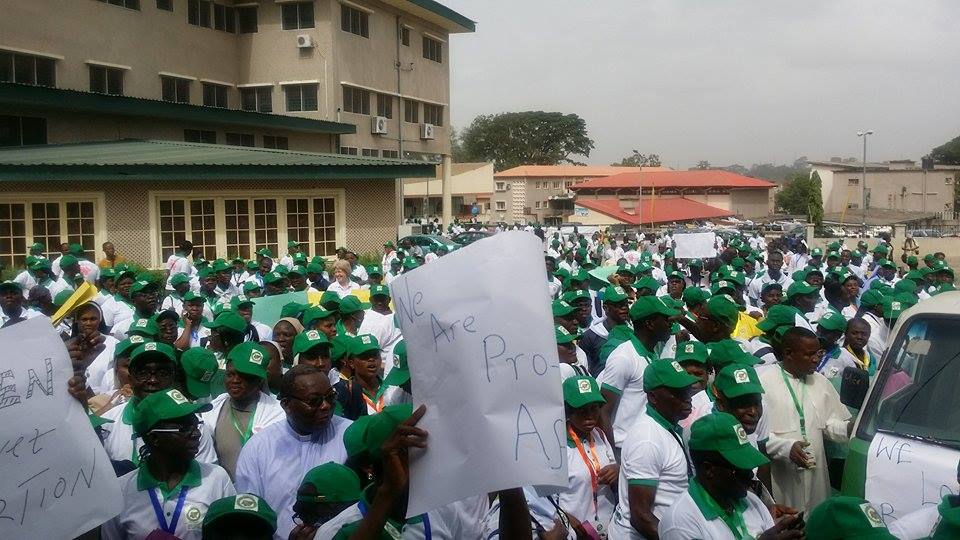 In the afternoon, each of the speakers delivered their workshop presentations to at least three groups. I found everyone in the groups who attended my workshop to be very eager to learn but also very knowledgeable and full of zeal. They just wanted to spread this pro-life message to as many people as possible. Antonia had brought SPUC literature to distribute to those attending the workshop and I’m told it was all gone after the first group!


We could learn a thing or two from the pro-life movement in Nigeria. For one thing, my Dad asked me if the Nigerian bishops could please come and teach our bishops how to hold a pro-life conference! I pointed out that in spite of the joy and zeal at the conference, they have a huge mission in front of them. In many cases, more money is being spent by organisations like DFID on contraception in Africa than on education and sanitation. British Council scholarships are no longer commonplace, as they once were. Nigerians striving to protect the family must fight against all this and more. We cannot all campaign for them at the UN, but we can all speak out in our own way against this new form of colonialism. If you are the praying type, please re-double your efforts on their part.