Do we live in a civilised country? Draw your own conclusions.

Last night the House of Lords considered the Human Fertilisation and Embryology Bill at Report Stage. During a debate on Baroness Masham’s amendment which was aimed at eliminating disability as a specific ground for abortion, Baroness Meacher (pictured) argued that it would have been in the “best interests” of two children she knew with cerebral palsy to have been aborted.

“I want to speak about the rights of the child. The Mental Capacity Act refers to the child having capacity; if they do not have capacity, it is important for the professionals to consider their best interests. If we could hold to that, we would be doing pretty well.

“I happen to know two tiny children who were born at 25 weeks with very severe cerebral palsy. They were natural births. Those two children cannot breathe naturally; they have to be helped to breathe. They will never talk. They lie on their backs and can do nothing. My belief is that there are children, born at those very early ages, who are not viable people. It would be in their best interests to have been aborted.

“There rests my case. We need to consider the best interests of these babies.”

Baroness Meacher’s statement is interesting and significant for a number of reasons. Firstly, none of the other peers present shouted “Shame”; secondly, the Mental Capacity Act does not apply to children; thirdly, Baroness Meacher’s reference to the Mental Capacity Act suggests what SPUC has always pointed out – that “best interests” in that legislation can be defined in such a way that mentally incapacitated patients may now be killed in their “best interests” – as happened to Tony Bland; fourthly, Baroness Meacher clearly considers that her own capacity and achievements in life put her right to life in a different category from the right to life owed to people with cerebral palsy – that she is “viable person” but “they” are not “viable people”.

The pro-abortion lobby got their arguments pretty muddled up during the debate on Baroness Masham’s amendment. Lord David Steel (pictured), the main sponsor of the Abortion Act 1967, responded to Baroness Masham’s reference to Beethoven; that, given Beethoven’s family history, he might have been aborted.

Lord Steel said that Baroness Masham’s argument was "fundamentally false because you cannot have abortion retrospectively. Nobody has ever said either to Beethoven or to any of these (disabled) children I have referred to: 'Oh I wish you had never been born.' That is an absurd argument and not one that should be sustained.” Enter Baroness Meacher stage right! (See above)

Baroness Tonge, a leading supporter of the Voluntary Euthanasia Society, spoke along much the same lines as Baroness Meacher. She said: “I said in Committee that we were not talking here about disabled human beings, but about some grossly abnormal human beings; many of those whom I have seen bear little resemblance to human beings.

“In Committee I mentioned the child with anencephaly that I delivered. It had no brain and a grotesque appearance...”

And so she goes on.

For a loving and civilised view of anencephalic babies, read the report of the remarkable case of Marcela Jesus Galante Ferreira from , to which Alison Davis drew my attention:

“Little Marcela de Jesus Galante Ferreira has broken all the records of survival. The anencephaly she suffers should have caused her death hours or days after birth, but to the amazement of many, she is now four months old, becoming the new pro-life symbol in and the most uncomfortable celebrity for some pro-abortionists who have criticized doctors for helping the infant.” 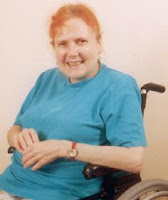 Alison Davis (pictured), the head of No Less Human, a division of SPUC, and who has spina bifida, put the ethical position to me this way:

“Every baby is entitled to his or her natural life-span however long or short that may be. And we do them an injustice if we cut short their life by even a minute. Every person is entitled to their life whether it lasts one minute or a hundred years.”

For reasons explained here, we are opposed to introducing amendments to the Abortion Act in this Parliament.
at 17:46