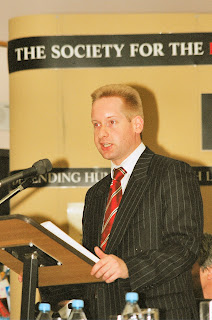 Last night Anthony Ozimic, SPUC political secretary (pictured), debated against Dr Robin Lovell-Badge, head of developmental genetics at the National Institute for Medical Research and one of the leading scientist-promoters of destructive embryo research, on BBC Radio 5 Live. The catalyst for the debate was the granting of licences to two sets of researchers to create human-animal hybrid embryos. Anthony argued that “deliberately blurring the line between humans and animals is simply not an ethical way to approach the cure or treatment of disease”. Dr Lovell-Badge responded: “People didn’t want to have to blur the lines between animal and human...”. So there we have it: scientists are knowingly and intentionally striking at what makes us human.

Dr Lovell-Badge claimed that an early embryo is just a collection of cells and not a human being, because in the first few days after conception it is not possible know which cells will form which particular part of the child’s body, or even form the placenta. Anthony countered that Dr Lovell-Badge was confusing “the physical development of the embryo with the genetic properties of the embryo....What makes us human is our genes, not which cells go to which parts of the body later in development.”
Dr Lovell-Badge tried to stump Anthony by claiming that there was very little or no difference between the early embryo and the genetically-modified skin cells created recently in Japan, cells which might have flexibility equal to that of embryonic stem cells. However, Anthony corrected Dr Lovell-Badge by pointing out that “those cells [induced pluripotent cells] are embryonic-like –they’re not embryo cells. They haven’t come from an embryo. We’re not talking about embryos: we’re talking about embryonic-like cells; or cells which have similar properties to embryos; or which have similar potential for pluripotency as embryonic stem cells. So we’re talking about two completely different things.”Here are some more things Anthony said in the debate:“Embryonic stem cell research is highly speculative and extremely primitive in terms of its development. There’s no reason to believe that cures or treatments for conditions such as motor neurone disease will come from embryonic stem cell research, whether the stem cells lines used are taken from hybrid embryos or from purely human embryos. No one can fail to be moved by the stories of persons with motor neurone disease; and yes, we have a moral duty to try to cure and treat disease. We must, however, never do wrong that good may come of it. We believe that, where embryos are human, to create them, exploit them by taking their stem cells and in the process kill them, is contrary to the basic right to life. We would instead encourage advances in adult stem cell research, which is already providing benefits for patients in over 70 different conditions. We would say that if any cures or treatments are to come for, say, motor neurone disease, they are more likely to come from ethical alternatives such as adult stem cell research, rather than this highly speculative, primitive and ethically dubious area [embryo research].“Human life begins at conception. At conception we have a full genetic complement of a human being. Today I am no different genetically from what I was when I was created at the first point of conception. Embryos, therefore, have an equal right to life and an equal place as members of the human family. Where we are talking about hybrids – depending on the genetic mix and the different types of hybrids that can be created – they may or may not be human. We don’t know. In fact, that’s one of the reasons why we shouldn’t create them: because we have no way of knowing how they should be treated if we don’t know if they’re human, animal, neither or both. So it’s fundamentally contrary to at least human dignity, and may well be contrary to human life, to the right to life, because it involves the exploitation and through that the killing of human embryos.”“The early human embryo may be a bunch of cells, but it’s the most amazing bunch of cells! The reason why it is the most amazing bunch of cells is because it’s a self-directing, self-developing organism. It directs its own development; it doesn’t rely upon other people to direct its development; it just needs its natural environment, which is the womb, to grow. When the embryo is in the womb, in fact it tells its mother: “I’m present! I’m a human being! I’m your flesh and blood! Don’t miscarry me!” It is a being, and we would say that it is a person, because it is a member of the human family and therefore it is a human person. Simply because it’s small and not recognisably human in shape, doesn’t mean that it’s not human.“The small percentage of animal input into cytoplasmic hybrid embryos or cybrids may be extremely important, and may change its functionality. If , for example, such an embryo was implanted and brought to birth, would be a rational being?”
at 17:28