Blair in the cathedral and the “universal right to abortion” 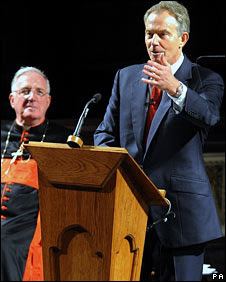 I have written again to Mr Blair to ask him if he will to reply to my letter of 11 January.

Amongst various other matters mentioned in my letter, I want to know whether he now repudiates his government’s commitment to the promotion of abortion on demand as a universal fundamental human right.

An SPUC colleague who was in the cathedral yesterday tells me that Mr Blair hedged everything "like a typical politician". The BBC quotes him as saying: "There is nothing I look back on now and say that as a result of my religious journey I would have done things very differently but that is expressly not to say that I got everything right." Old habits die hard.

As I said in my post of 4th February, Tony Blair has reportedly got his eye on becoming president of the EU Council. While there’s a possibility of him running for public office in any part of the world, citizens have a right and a duty to challenge him on his political record on pro-life matters. As a Catholic myself, I do not believe that politicians should be protected from public scrutiny simply by being received into the Catholic church.
at 12:06