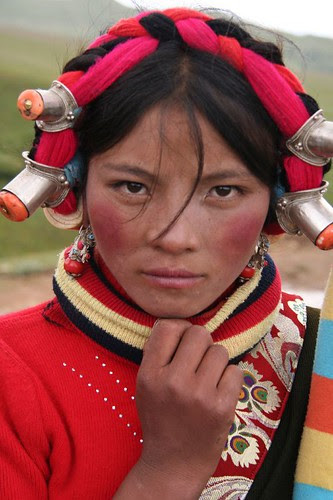 It is very important that the issue of China's coercive population control programme, often ignored in the anti-life West, is kept before the public eye. I'm therefore very grateful to Bishop Joseph Devine of Motherwell, Scotland for a recent sermon. Bishop Devine said: “[In Tibet], as in China itself, Chinese communist rule directs state-sponsored killings, forced abortions and sterilisation of women more often than not without the fuss of anaesthetics or medical treatment".

Channel 4's 'Dispatches' programme recently sent Tash Despa, a Tibetan refugee and now a British resident, to Tibet to travel undercover for 3 months to find out what life was like for ordinary ethnic Tibetans under Chinese rule.

Before entering Tibet, Tash interviewed a male Tibetan refugee, who recounted one occasion when "[t]he Chinese ordered us to attend a conference about Socialism. Its main purpose was to carry out sterilisation of women and to fine those who had more than 2 children."

Once in Tibet itself, Tash interviewed a male Tibetan torture victim. The programme's narrator explained: "Despite years of torture and imprisonment, this man is determined to continue to fight the Chinese. More recently he has been investigating the government's population control policies." The torture victim said: "There were 6 million Tibetans before Chinese rule. There are only about 5 million of them in the Tibetan region today. So there has been no population growth in this period. Yet now they are carrying out forced sterilisations in the Tibetan region. Those who refuse are punished. They are implementing this here and now. This is a violation of human rights."

The narrator continues: "Tash had made contact with a woman who claimed to have had personal experience of enforced sterilisation. She asked the team to arrive in the early hours of the morning, terrified of the consequences of foreigners being seen coming to her house."

Narrator: "She said she had a chilld out of quota under the terms of China's one child policy. As a result, she was given the choice of a fine she couldn't pay or sterilisation."

Woman: "I cried when I was lying on the bed after the sterilisation. I cried thinking that I'd been forced to have a sterilisation when there was nothing wrong with me. I was feeling sick and giddy and couldn't look up. It was so painful. Apparently they cut the fallopian tubes and stitch them up. When they opened me up they pulled them out by the roots. It was agonising. They didn't use anaesthetic. They just smeared something on my stomach and carried out the sterilisation. Apart from aspirin for the pain there were no other drugs. And then from the day after the operation I had to look after myself. If I needed a drip I had to pay for it myself."

Tash: "Can you show me the scars from the sterilisation?"

The woman shows Tash her scars, recounting how "I was so frightened. I can't even remember how I felt. I wasn't the only one. About half a dozen women in our village had to undergo sterilisation."

Woman: "Yes, forcibly. No one would have done it willingly. They come to the door to fetch you by force. They threaten to confiscate stoves and anything valuable from the house. So people get frightened and go for the sterilisation. Some people were physically damaged by the operation. They have limps and have to drag their hips. Since then people are too scared to have many children."

The narrator resumes: "The Chinese government says that the one child policy does not apply to Tibetans. But this woman's experience is far from unique. In 2002 a UN special rapporteur said women in Tibet are subjected to forced sterilisation, forced abortion, coercive birth control policies and the monitoring of menstrual cycles."

Last month I blogged about the false claim that the one-child policy doesn't apply to Tibetans.

Please register your protest against coercive population control in Tibet and in China with the Chinese Embassy in London, 49-51 Portland Place, London W1B 1JL, email: press@chinese-embassy.org.uk

Click below or here to view the whole Dispatches programme "Undercover in Tibet".