Pro-life groups come together in 40th anniversary witness and prayer 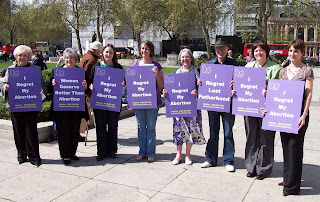 Yesterday, in Parliament Square, London, eight brave people spoke to hundreds of listeners and thousands of passers-by about their personal abortion experiences on the 40 anniversary weekend of the implementation of the Abortion Act 1967 (on 27th April 1968). Their voices and stories are changing the nature of pro-life work in the UK and in other parts of the world. Their defence of life, summed up in their simple statement, is unanswerable : "I regret my abortion".
The event was organized by the Society for the Protection of Unborn Children and British Victims of Abortion.
Last month the Royal College of Psychiatrists confirmed that women may be at risk of developing mental problems as a result of having an abortion. Margaret Cuthill, national co-ordinator of British Victims of Abortion, BVA, commented: "This latest evidence-based research confirms what post-abortion counsellors have been saying for years.
"Without exception, all the clients I've counselled over 20 years say they were given no indication of how they might be affected by physical, emotional, and psychological problems after abortion. These traumas dramatically affect the quality of their lives after the initial period of relief, which generally follows abortion, passes."
BVA provides literature and advice to address the present imbalance in the information being given to women, and welcome the College's suggestion that more is needed at the first point of contact.
"Numbers contacting BVA for help are increasing, and more needs to be done because the blanket approach of abortion being the only solution to crisis pregnancy does not address women's needs. "Women deserve better than abortion." BVA is a post abortion helpline and counselling service, providing free help and support to women in crisis pregnancies or suffering Post Abortion Trauma. More information on BVA can be found at http://www.bvafoundation.org/
After the talks, SPUC supporters joined a Choose Life service of prayer and worship at Westminster Abbey organized to mark the same anniversary. The service took place at the Memorial to Innocent Victims built into the pavement area immediately outside the West Door of the Abbey. It followed a week of prayer and fasting in preparation for the event.
In the pictures (courtesy of William Jolliffe) below, Bishop Thomas McMahon, is sharing a moment with Paul Tully, SPUC general secretary, after the service - and I am speaking to Lady Salisbury to thank her for organizing the event. 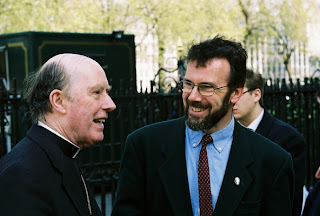 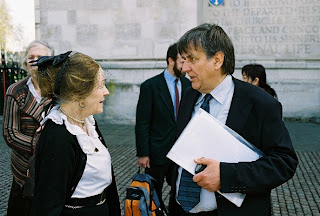 After the prayer service, we went back to join other SPUC supporters who'd stayed behind to spread the message about abortion's aftermath to the general public in the heart of London, forming a pro-life chain. 50 other such events were simultaneously held by SPUC branches in towns and cities throughout Britain. 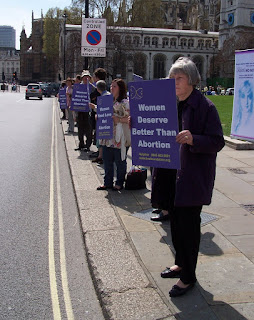