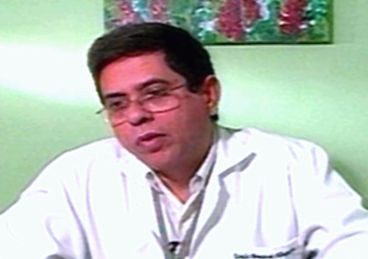 Anthony Ozimic, SPUC's political secretary, heard Dr Rivaldo Mendes de Albuquerque (pictured) being interviewed on the BBC World Service yesterday. He is the doctor in the tragic case of the nine-year old girl whose twins were aborted, which I have been writing about in recent days. Anthony has transcribed the interview and I publish it below.

Do pass this on. Dr Rivaldo is strongly pro-abortion and opposes church teaching on a range of issues - which throws significant light on the furore surrounding this case.

Presenter George Arney briefly describes the background to the story, then:

Dr Rivaldo Mendes de Albuquerque: We’ve been providing services to the women and child victims of sexual violence for 13 years now. This girl had been sexually abused by her step-father since the age of six. Normally teenagers have their first period during the ages of 11 and 13 but some ovulate and menstruate earlier, especially when subject to early sexual stimulation, which was the case with this girl.

George Arney: When she came into your hospital, did she actually realise that she was pregnant, because she was so young at the time, she can’t have known very much about it?

Dr Rivaldo Mendes de Albuquerque: This girl is nine years old, and she comes from an extremely poor vilage in a rural part of our state. At all moments she behaved like a child. She had no idea about pregnancy and that she was carrying twins. She just acted like a child, she played with her toys.

George Arney: She came in, I think, complaining of stomach pains, I think. What kind of reaction did she have when she was told she was pregnant, and pregnant with twins, what’s more?

Dr Rivaldo Mendes de Albuquerque: It was the reaction of a child who doesn’t know what it means. She was perplexed and surprised with the situation, and she wanted relief from the pain that was bothering her. She didn’t associate it with becoming a mother. She never expressed that possibility. She just wanted relief from the discomfort, and never made the connection between the pain and giving birth to two children. She never expressed that opinion. She was pregnant with twins but the number of babies didn’t make any difference to her. What was bothering her was the stomach ache, that was all.

George Arney: Did she give her consent to the abortion? She must have presumably realised that she was pregnant before the procedure was carried out?

Dr Rivaldo Mendes de Albuquerque: Yes, she wanted to be free from the discomfort she was feeling. At all times her mother was with her, and she was being informed, and agreed with the procedures. Her womb was so large because she was carrying twins, and she’s such a small girl herself. If the doctors had allowed this pregnancy to develop, we would risk losing the child and the foetuses. In cases of rape of such a young girl, this kind of decision would require the parent’s consent. As well as the risk of death, the decision is with the doctors. In this case, it was made by the mother and the medical team.

George Arney: So what went through your mind, Dr Rivaldo? You could see that this girl was very young, she was in danger, but did you have to wrestle with your conscience before going ahead with the abortion, as you yourself are a Catholic, and you know full well that abortion is not permitted by the Catholic Church?

Dr Rivaldo Mendes de Albuquerque: I’m an active Catholic, but in this case I found myself before a nine-year-old girl who risked dying for being sexually abused. From the legal point of view the Brazilian law allows us to stop pregnancy resulting from rape or where there’s a risk of death. From the moral point of view, what we did was acceptable, something I would do to anyone close to me, even a relative. And from the religious point of view, our intention was to promote good. Despite the strict codes of the Catholic Church, we didn’t feel intimidated by these codes, so we acted to save the life of the child, which was most important. The religious laws were written by the clerics, and do not translate God’s words exactly. That gave us peace of mind, and we recognised that the Catholic Church has made, and continues to make, mistakes, and especially with regards to women’s rights in Brazil and the rest of the world. The Church is meddling inappropriately into these rights, which are internationally recognised human rights.

George Arney: That’s quite a strong criticism of the Catholic Church. Did you realise that when you decided to go ahead with the procedure that you might be excommunicated?

Dr Rivaldo Mendes de Albuquerque: I didn’t, never. But in fact, it isn’t the first time we’ve been excommunicated. When we started providing services to women victims of sexual violence, and offering them abortions 13 years ago, we were excommunicated then. But being excommunicated has never made me feel distant from God, and from my moral, legal and ethical principles. It’s a hard situation, but I didn’t feel threatened by God. I felt threatened by men.

George Arney: So how has this confrontation you’ve been having with the Church over these past 13 years impacted upon your own faith? It must be very difficult being at loggerheads with the Church and with the Vatican?

Dr Rivaldo Mendes de Albuquerque: Well, as a Catholic, I believe in God and see the mistakes by men in the name of God. Some positions of the Catholic Church, on birth control, against abortion, against homosexuality, in defence of celibacy, and other examples, only reinforce that the Church seems to be out of tune with people’s thinking, and people’s will, not God’s will, for God never mentioned any of that. Men wrote about that, and said it came from God.

George Arney: This whole business has caused quite a stir internationally as well as in Brazil, and even President Lula has condemned the Church for excommunicating you. What kind of reaction from the public have you had?

Dr Rivaldo Mendes de Albuquerque: We received thousands of messages of support from Brazil and abroad, and opinions polls conducted in the last weeks shows that the Brazilian society sided with this child and with the medical team. That showed that the question of abortion is a matter of public health in Brazil, and must be considered case-by-case. Restrictive laws do not improve public health, particularly women’s health.

George Arney: In this particular case, the outcry stems, doesn’t it, from the fact that the girl who was pregnant was so young and that she was raped by her step-father allegedly?

Dr Rivaldo Mendes de Albuquerque: In this particular case, it was the bishop’s attitude, by promptly excommunicating the mother and the medical team. We would expect him to show compassion towards the child, and try to understand the reasons underpinning the doctor’s decisions to carry out the abortion. I believe this is the reason why the public sided with the child and rejected the bishop’s reaction.

George Arney: What’s happened to the girl now, Dr Rivaldo, and what sort of impact do you think this is likely to have on her future life and on the life of her family?

Dr Rivaldo Mendes de Albuquerque: The child is now being assisted by social workers, doctors and psychologists. I have the impression that the psychological harm caused the sexual abuse will never be reversed. I’m very concerned that this child may return to the life of poverty in which she lived with her mother and her sister, and she may again become the victim of renewed violence.

George Arney: Dr Rivaldo Mendes de Albuquerque, firm in his faith, despite being excommunicated by the Catholic Church.