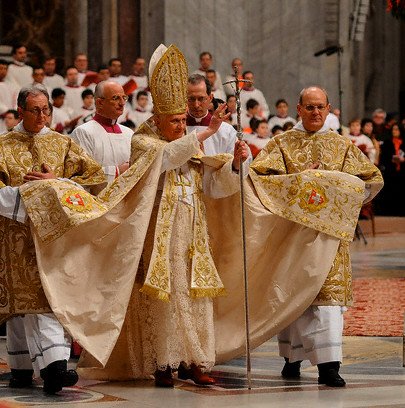 Pope Benedict has been under heavy attack following his visit to Africa and his clear statements pointing out that condoms are not the solution for AIDs. International Planned Parenthood Federation have led the attacks in order, as I explained at the time, to protect the "big business" in which they are engaged.

I have written many times on this blog about the Catholic Church's teaching on the truth and meaning of human sexuality, and particularly about the intimate links there are between Pope Paul VI's encyclical Humanae Vitae, the sanctity of human life and the pro-life struggle. The Pope needs our support for his pro-life/pro-family stance, so I am encouraging you to sign the declaration at http://www.yes-for-benedict.eu/

We, the undersigned, declare our full solidarity with the Holy Father Pope Benedict XVI and his teachings.

We strongly object to the irresponsible attacks in the media on the person of the Holy Father in the context of his pilgrimage to Africa. His words of truth have become a pretext for further attempts to undermine the teachings of the Catholic Church, and especially the Encyclical “Humanae Vitae”.

We wish to express our great gratitude to the Holy Father for his uncompromising proclamation of the Truth, which the modern world needs so much.

The list of people who signed the statement will be delivered to the Vatican.
at 14:24