The trouble with the Catholic Education Service position on sex education 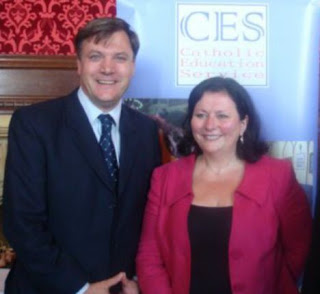 Ms Oonagh Stannard, the chief executive and director of the Catholic Education Service (CES), said today that the CES supports the principle of making sex education lessons compulsory, providing that what was taught was in line with parents' wishes and upholds the ethos of the particular school. (Schools must teach pupils about babies, Aids and sex, The Independent)

There are a number of problems with the Catholic Education Service's position to which SPUC is urgently seeking answers.

Arguably the biggest problem is summed up in the Catholic Education Service's letter to the Government on 26th August, 2008, in which Ms Stannard (pictured with Mr Edward Balls MP, the children's and schools minister) writes: "I support the concept of encouraging more schools to draw on the support of external professionals and on having a cadre of well trained, skilful people tooled up to delver SRE [sex and relationships education]. I would suggest, however, that there is some anxiety, certainly in Catholic schools about the role of external professionals in SRE. Sometimes this is because of the one day visit/hit approach to the SRE curriculum and at other times it is because [of] a lack of clarity about the role of the school nurse. Much could be done to assuage concerns by introducing the expectation that schools develop a protocol/written agreement of collaborative working etc to cover such external professionals working in schools, accompanied by strategies to ensure that it is implemented. This could be a powerful weapon in building parental confidence and ensuring that partners from other agencies and visitors are appropriately backed and supported in their work."

The trouble is that the CES used strikingly similar language in their document on the pro-abortion government advisory body, Connexions. They say: "the work of the Connexions Service is making an increasing impact on young people in Catholic schools and colleges. It is a service to be welcomed".

The CES document continues: "[Connexions] has also caused some concern in our Catholic community because its wide remit to provide advice and guidance to young people includes matters of personal development, and by implication, sex and relationships (SRE) education. These are, of course, the responsibility of the governing bodies of our schools and colleges and there will usually be robust policies to accompany SRE. Colleagues in dioceses, schools and colleges have been rightly concerned to ensure that the work of personal advisers within the Connexions Service should not compromise our Catholic rights and the particular ethos of our schools and colleges."

Now, Connexions is a government agency which is committed to giving schoolchildren, under the age of 16, access to abortion and abortifacient birth control drugs and devices without parental knowledge or permission. Connexions' advisers are trained to tell young people that they can obtain birth control drugs and devices, and abortion, without parental knowledge or consent - as can be seen in Young People and Sexual Health, a reader for those participating in the Connexions training programme, a copy of which I can provide to readers (write to johnsmeaton@spuc.org.uk).

Tragically, it's all too clear that Connexions are promoting access to abortion and abortifacient birth control among Catholic schoolchildren in spite of their undertaking to respect the Catholic ethos of the schools.

As a Catholic parent who has been working in the pro-life movement for 35 years, I regard the CES policy of welcoming Connexions advisers into Catholic schools as possibly the greatest ever betrayal of the sanctity of life and families in Britain.

Will the Catholic Education Service, in the light of their concern not to compromise "Catholic rights", be reversing its position on welcoming Connexions into Catholic schools? Will they also insist, in the light of their letter to the government (see above), that external professionals visiting Catholic schools must not include representatives from pro-abortion groups or anyone trained to advise children of their alleged legal right of access to abortion and abortifacient birth control drugs and devices without parental knowledge or consent?
at 10:17