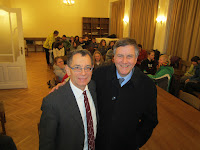 On Wednesday I had the privilege of speaking at a pro-life march in Budapest, the capital of Hungary. Over recent decades, anti-life policies have resulted in the killing by abortion of more than 6 million Hungarians, and thus deeply damaged many millions of families. Pro-lifers in Hungary chose the feast-day of the Holy Innocents to name the children lost and toll bells in their memory.

At least one Hungarian, by the grace of God and by the strong intervention of his father, survived the abortion intended for him. He is my host, Dr Imre Taglasy, the director of Human Life International (Hungary) who took such good care of me when a bone got stuck in my throat on my first day in Budapest. He and I are pictured above in Budapest, after the march.

Here, in his own words, is his deeply moving story:


I begin my story with my family, and especially with my father, who was a major in Hungary till the end of the Second World War. As a professional soldier with his religious conviction (he was born in a Catholic family of eight children) he was declared a class-enemy of the new Communist regime and was sacked at once and removed with his wife and two sons from Budapest to the Great Hungarian Plain (puszta). They were ordered not to leave their dwelling place. He could hardly find the most basic job ... he and his family were starving.

In this sad plight my father's wife realized she was pregnant. My father tried to protect me, but my mother did not want to carry me to term. But it was not so simple to get rid of an unborn baby in the early '50s ... so she asked my grandfather staying in the capital to get a doctor who would be willing to perform the abortion. He found such a doctor in Budapest but class enemies were not allowed to leave the plain (puszta), so while my father was absent she tried to cause an abortion by jumping down from a kitchen table; when that failed she took very hot baths in a tub but they were not successful either. Then she got a lot of quinine pills from her brother. She took them but they were not sufficient to cause a miscarriage so I was born.

I heard the story of my birth accidentally when I was 11 years old and when my father and I were staying in Yugoslavia with relatives. It was late at night and I had gone to bed in the room in which my father and my relatives were talking.

At that time my parents had already divorced and one of my relatives asked my father why. Thinking I was asleep, my father told him the story.

As I lay there in bed, neither a small child nor an adult, I cried, speechlessly, all night long into my pillow. I experienced an emotional earthquake. I felt good myself and I did not know why my mother had tried to kill me at all.

I am still looking for the answer which is perhaps blowing with the wind, since she died some years ago.

There are two different expressions in our Hungarian language concerning "mother". One of them ("edesanya") is connected with "sweetness" meaning that the sweetness of a loving mother has a connection to the milk you get from her bosom. The other word ("anya") simply means that somebody has a mother but this term is very formal and has no special content of sentiment so one uses this term in every official form requiring the name of your parent. In fact my mother tried to kill me, terrorised by the economical pressure of the regime and when it was not successful she didn't give me suck, so I was neither able to enjoy her milk nor her love.

Later when I was two years old I was found by a very nice young lady who lifted me up to her heart from under the kitchen table. She bought me new clothes, shoes, brought me to the opera-house for performances (since she was a ballet-dancer) and to the photographer since she was proud of "her" nice godson ... my relatives told me that I had usually called her with this word: "mother" (edesanya).

My biological mother could not love me although I was begging or dancing for her approval and acceptance. I studied well, become a well-known writer by publishing several books, carried out scientific research and won academic honours but everything seemed to be in vain since I was not able to win her love. In my twenties I published a book of poems and one of these works reflects on my life story using the ancient Greek myth of Penelope. In this poem you can analyse the confused bonding of an abortion-survivor with his parent or with the abuser of her child.

It took 50 years of pain and sorrow to overcome the situation of a deeply damaged (unborn) child and that of a post-abortive mother ... I always tried to love my mother ... meanwhile I realized that I hated those foods (cheese, beer, etc) which she liked whilst, on the contrary, I liked the kind of women who have black hair and eyes, slight face which reminded me of my god-mother. So many times I asked myself: where is my mother, how can I love her?

Before her death the Lord gave me the answer by His merciful forgiveness. After so many years of struggling, begging and dancing for her love I finally was able to reconcile with her before her death. It happened by not accepting but rather understanding some of the elements of the kind of "internal" terrorism which pushed and pressured her to kill me. And finally I am going to die too and I badly need this forgiveness of the Lord for my own sins as well.

There is a picture in my bedroom above my bed. This photo was taken by the sculpture of the Pieta carved by Michelangelo in the middle of 16th century. The picture illustrates the Blessed Virgin who is a Patron Saint of Hungary and now she is perhaps my mother and hope and trust as well.

Against the civilisation of death I am now working for the culture of life full time. From the special grace offered me by Almighty God, the Creator, I have a large family ... The smiles of my children and wife are my strongest weapon in doing my duty to protect life! Thanks to the Lord!