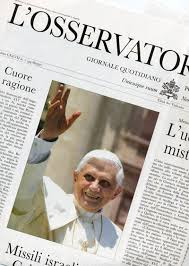 I am delighted to read in L'Osservatore Romano, a leading article, published yesterday, praising Cardinal O'Brien's and the Scottish bishops' fearless defence of families.

It describes the Cardinal's decision to suspend direct communication with the government of Scotland in protest against its support of the introduction of same-sex "marriage" as  "eloquent and effective" action. L'Osservatore Romano states:


"A symbolic action, but one that is eloquent and effective. Cardinal Keith O'Brien, Archbishop of Edinburgh and President of the Bishops' Conference of Scotland, has suspended direct communication with the government of Scotland in protest of its support of the introduction of same-sex unions to the country. The Cardinal refused to discuss the issue, leaving any future meetings to officials.

"The Scottish government has decided to modify the law in force, despite the fact that public opinion seems to believe the reform to be unnecessary. Nevertheless the government has been working towards the law this year and has indicated that the first same-sex ceremonies could happen as early as 2015. Regarding the proposal of the legalization of homosexual marriage in England and Wales, Cardinal O'Brien once more raises his voice in defence of civil society. His stance is not Catholic but simply one of a civil nature. The Cardinal upholds reason and common sense.

"This month the Scottish government began considering same-sex unions, asking the public if same-sex marriage should be introduced in England and Wales. The Cardinal said that he hopes that many people will respond and reflect on the possibility of signing the petition supporting traditional marriage."

Marriage as an institution protects children, both born and unborn. Statistics show that unborn children are much safer within marriage than outside marriage. For more information see SPUC's position paper and background paper on same-sex marriage.  Please do everything you can to support SPUC's Britain-wide lobby of Members of Parliament on marriage. Like Cardinal O'Brien, let's not be intimidated by charges of 'homophobia' as we seek to uphold the institution of marriage, which is the faithful lifelong union between one man and one woman, which is the foundation of the family and the fundamental group-unit of society.