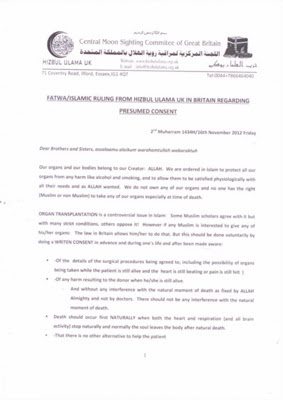 Hizbul Ulama in the UK (Association of Muslim Scholars/UK) has issued a Fatwa/Islamic ruling opposing the Welsh Government's plans to introduce legislation allowing presumed consent in organ donation. The Welsh government is calling it "deemed consent", in which people living in Wales for a period of six months or more will be opted-in automatically as organ donors. This will include prisoners, tourists, and students.

The Islamic ruling calls on "all Muslims who are living in Wales to oppose strongly this unjust, unislamic, inhumane bill by all legal and peaceful means"

Our organs and our bodies belong to our Creator: ALLAH. We are ordered in Islam to protect all our organs from any harm like alcohol and smoking, and to allow them to be satisfied physiologically with all their needs and as ALLAH wanted. We do not own any of our organs and no one has the right (Muslim or non Muslim) to take any of our organs especially at time of death.

ORGAN TRANSPLANTATION is a controversial issue in Islam: Some Muslim scholars agree with it but with many strict conditions, others oppose it! However if any Muslim is interested to give any of his/her organs: The law in Britain allows him/her to do that. But this should be done voluntarily by doing a WRITTEN CONSENT in advance and during one's life and after been made aware:

 Of the details of the surgical procedures being agreed to, including the possibility of organs being taken while the patient is still alive and the heart is still beating or pain is still felt
 Of any harm resulting to the donor when he/she is still alive. And without any interference with the natural moment of death as fixed by ALLAH Almighty and not by doctors. There should not be any interference with the natural moment of death.
 Death should occur first NATURALLY when both the heart and respiration (and all brain activity) stop naturally and normally the soul leaves the body after natural death.
 That there is no other alternative to help the patient

We became aware lately of a draft Bill in Wales called: PRESUMED CONSENT or DEEMED CONSENT
In this Bill, if it becomes law: the doctors/hospitals in Wales have the full right to take our organs at time of death, WITHOUT ANY WRITTEN PERMISSION FROM US BEFORE AND DURING OUR LIFE ... THIS IS UNACCEPTABLE HUMANELY ISLAMICALLY AND MEDICALLY.

We all know that before any medical or surgical procedure in hospitals today, we have to give our own informed consent before.

So why our basic human right: CONSENT is taken from us in this Bill?

Besides, almost all Muslims who will die in Wales and who did not know about this Bill, their organs will be "TAKEN AND STOLEN" by force, if the Bill is implemented, without giving their own written consent before. Also, those Muslims who were against organ donation and organ transplantation during their life, their organs will be taken, without their knowledge before[hand] and without their consent.

Finally: WE LIKE TO APPEAL TO ALL THE MUSLIMS WHO ARE LIVING IN WALES TO OPPOSE STRONGLY THIS UNJUST UNISLAMIC UNHUMANE BILL BY ALL LEGAL AND PEACEFUL MEANS:
WE ASK EVERY MUSLIM (man or woman) in Wales TO WRITE TO THE MEMBERS OF THE WELSH ASSEMBLY TO EXPRESS THEIR OPPOSITION AND TO ASK THEM TO STOP THIS BILL AND TO EXPLAIN CLEARLY HIS/HER OBJECTION AS A WELSH CITIZEN.

MAY ALLAH GUIDE US AND GIVE US THE VICTORY OVER THIS DREADFUL BILL.

Those seeking further information on the Fatwa should contact Dr A Majid Katme, Health/medical adviser to Hizbul Ulama UK on 07944 240622