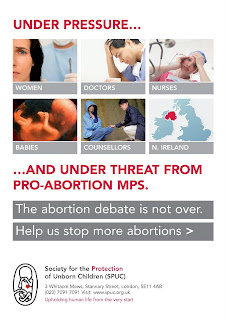 SPUC’s new leaflet is now available explaining the latest amendments to the Abortion Act, due to be considered by MPs in October at the Report Stage of the Human Fertilisation and Embryology Bill (if selected for debate by the Speaker).

October’s parliamentary debate on these amendments could lead to the most damaging extension of the Abortion Act for over 40 years.

Please help us alert people to this threat by ordering a supply of leaflets to give to them. The leaflets are designed for distribution to the general public, so please encourage anyone you can to circulate them widely – and order as many as you - and they - can distribute.

As our leaflet states: pro-abortion MPs want to abolish even the minimal constraints in the Act, like needing a second doctor to authorise an abortion. They want nurses and midwives to perform abortions (which makes it cheaper, but not safer). They want the Abortion Act extended to Northern Ireland against the wishes of the vast majority of people living there. Pro-abortion MPs also want punitive restrictions on pregnancy counsellors who don’t refer women for abortions. If these amendments are passed it is likely to mean more abortions than ever before: more babies will die. Reluctant women will face more pressure than ever to submit to abortions.

To order flyers write to lizfoody@spuc.org.uk
at 00:01