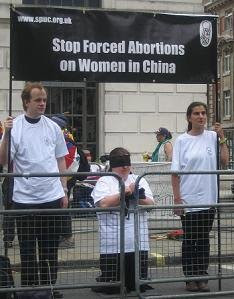 As the Olympic games open in Beijing, and some courageous American pro-lifers are arrested for protesting there, SPUC's youth and student division have been demonstrating against the one-child policy at the Chinese embassy in London. Their six-hour silent vigil includes one blindfolded participant kneeling. Our picture shows Francis, an Oxford University postgraduate student, Miss Maloney, a postgraduate student of bioethics at the Queen of Apostles Pontifical University, Rome, and Fiorella Nash of SPUC, event organiser (right).

Fiorella writes: "As a mother, it is incredible to me that any government regards itself as having a right to prevent women from having children. Western nations are complicit in this policy because they fund UN agencies which work alongside Chinese population controllers.
"Many people I have spoken to about this subject, including women who would regard themselves as feminists, shrug their shoulders as if it isn't that important. I wonder if people would be so accepting of such an abuse if it were going on in England? Would people still shrug their shoulders and refuse to comment if, during my second pregnancy, my husband had been told he would be thrown out of Cambridge University if I didn't abort, or if I had been forcibly detained at Addenbrooke's hospital during an ante-natal check and woken up from the sedation to find my baby had been killed and I had been sterilised?
"Reproductive rights just aren't that important when the woman actually wants to have a baby. The hypocrisy is disgraceful."