Reuters reports on a study published yesterday (in Pediatrics, online August 10, 2009) that:


"all types of maltreatment, physical abuse, emotional abuse, neglect, and sexual abuse, increase the risk for emotional distress at age 12 and sexual intercourse by age 14 and 16".

According to the researchers:

There then appears a mock-up of a teenager's diary reproduced here. 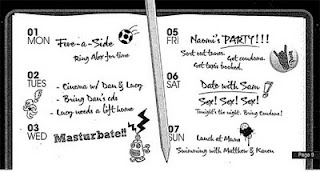 Do the government's experts seriously believe that promoting such ideas amongst teenagers (including, probably, some teenagers who have been abused) will help them develop into mature, well-adjusted, adults? Isn't the State, by blatantly promoting sexual activity in this way - alone or with others - subjecting youngsters who may already have been abused to state-sponsored child abuse?

And isn't the Catholic Education Service, by supporting the principle of making sex education lessons compulsory (providing that what's taught is in line with parents' wishes and upholds the ethos of the particular school) also running the risk of effectively supporting state-sponsored child-abuse? What if what the Sheffield NHS's corrupt material is upheld by the ethos of the school - does that make it OK?
I urge all concerned parents to contact me at SPUC if you're concerned.  It's vital that parents take a stand against government authorities and church authorities whose policies lead to usurping parents' rightful role - the role spelled out so clearly yesterday by a leading official of the Catholic Church at the World Congress of Families in Amsterdam. Bishop Carlos Simon Vasquez, the under secretary of the Pontifical Council for the Family, said:


“Only the vocation to paternity and maternity can transmit a responsible education in responsible procreation, which brings with it the necessary union between personal and social ethics through a harmonious existence that only the family can offer.”

This is kind of thing the Catholic educational authorities in England and Wales should be promoting, not compulsory sex education, albeit hedged around with provisos which still result in our children being thrown to the wolves.