I was delighted today to hear about a wonderful pro-life event this past weekend in Stratford, East London. At the time of this event I was in at an SPUC day conference in Belfast Castle, Northern Ireland. I will be doing separate reports on this conference and a pro-life conference in Dublin this past Sunday.

In Stratford 170-200 people gave public witnessing to the dignity of human life from conception, by praying, counselling and educating passers by outside a new BPAS abortion centre. I am informed that the group was made up mostly of local residents of Stratford, as well as 10 Catholic priests including Bishop Thomas McMahon's (the local Catholic bishop) representative, 10 religious brothers and sisters, and people coming as far as Colchester and Bournemouth. This is a great witness to the strength and commitment of the pro-life movement both locally and nationally. Plans were begun to organising a regular pro-life activity in the area. I wish them every success.

This event is the latest in long running campaign in Stratford, which has been led by SPUC.
Saturday's event was primarily organised by that wonderful pro-life group The Helper's of God's Precious Infants, but SPUC were well represented with Daniel Blackman, an SPUC researcher, playing a key organisational role in the day. Daniel has written a full report with several pictures on SPUC's new youth, Why I am Pro-Life. Here are some of the impressive photos from the day. 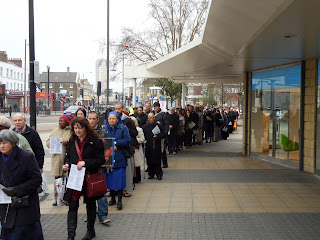 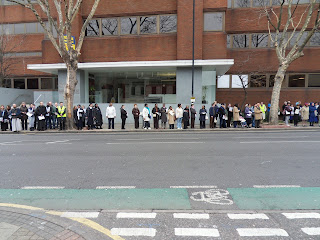 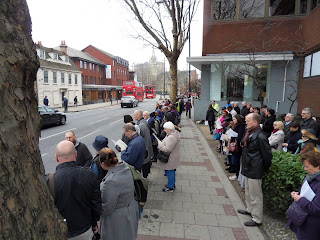 It is particularly encouraging to see such strong pro-life witness from the local Catholic bishop and Catholic clergy. The number of lay people in attendance is testimony to the great impact Catholic leaders can have when they take decisive in defence of unborn children. Daniel reports that:

"During the opening Mass, Monsignor John Armitage, the official representative of the local Catholic Bishop Thomas, read out a special letter of support. Bishop Thomas told the congregation that they had his full support, and lamented the tragedy of more than 200,000 abortions in the UK every year."

With leadership such as this there is still great hope for the pro-life movement in the UK.

Daniel's report concludes with some of the things that can be done now, by everyone, to help build on the momentum that the Stratford campaign has been building up for the best part of a year. I include them below and urge readers to take action to support this fantastic initiative in defence of the unborn.