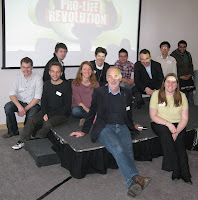 
"I was extremely grateful to be offered the opportunity to be funded go to the SPUC Youth Conference in Rotherham last weekend, what an incredible experience! I have never been to any conferences of this nature before, and didn't really know what to expect, I thought it would be inspiring, but the quality of the talks and the depth which the speakers went into their subjects exceeded all my expectations. 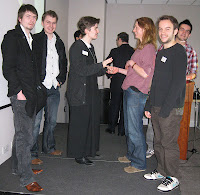 Pro-life issues were covered from many different perspectives, some of which I found particularly unexpected and thought provoking. An example which comes to mind is the talk given by economist Professor David Paton, who clearly showed that even when any moral or religious bias is taken out of the equation, statistics show that pro-life solutions have the most effective results in reducing teenage pregnancy and abortion.

Other speakers who stood out for me included Fiorella Nash, for explaining the irony of how modern feminism can be incredibly damaging to women, and Sister Andrea Fraile, whose compassion and love I found an absolute inspiration. She gave a beautiful talk about the psychological effects of abortion. She understands and explains so clearly how a woman can feel trapped and frightened into taking an action which can effect her and damage her in so many ways. Sister Andrea helps many of these women receive healing and peace through her work at Rachel's Vineyard, she's an absolute inspiration.

Aside from the serious business of listening to all these brilliant talks, we had the opportunity to meet some of the amazing young people attending the conference, including the group from Spain who picked up the guitar at every opportunity and serenaded us with their beautiful singing, as well as their impressive salsa dancing skills!

A special mention also of the contingent from Edinburgh University, who as well as contributing with many excellent and insightful questions, entertained us with their "interpretive dance" at the SPUCs Got Talent show, involving three bath towels and some GCSE German...

Overall it was an incredible weekend, the challenge now is to go forward with this information and make a difference, in whichever way is best suited to our talents, from prayer to fund raising to public speaking. Practices such as abortion, euthanasia, embryonic stem cell research and IVF contravene the basic human rights to life and dignity. We need to go forward in this battle with love and compassion and the strength that comes from knowing that the pro-life standpoint is the perspective of truth.

Thank you to all who were involved in organising this brilliant conference and special thanks to those from our church in Hythe who made it possible for us to attend, by their generous giving of their money and their time."


"Having been to many SPUC Youth Conferences this one stands out both for the intelligent level of debate throughout the weekend and the inspirational feeling of being amongst so many committed and like-minded young people from around the world. I came away from the conference having armed myself with new knowledge and arguments as well as new friends that I can link up with and work together to promote the pro-life message.

The weekend was a perfect combination of being educated, engaging in stimulating debate and just hanging out with other young people to find out more about their own lives and the pro-life work and initiatives they are involved in. It was fantastic that all the speakers stayed on for meals, coffee breaks and the infamous SPUC's Got Talent so that there were opportunities beyond the lecture hall to speak with them. They were incredibly accessible and keen to answer as many questions as they could and give us advice.

Often, personally and professionally, you can feel alone standing up for the pro-life cause and so attending a conference is an important way of remembering that there are other young people who believe in the same things as you. It's like a shot in the arm that gives you the courage and motivation to keep fighting as well as the conviction that actually you can change things. Listening to the stories of other people who have defeated their student unions over pro-choice amendments or junior doctors standing up against their seniors to have their voice heard gives you the kick up the backside to do it in your own environment."


"Thank you to Philippa Forsdike for taking me to the Youth Conference last weekend. I thoroughly enjoyed the conference, I learnt a great deal and learnt how to explain why I'm pro-life. For me the highlight of the weekend was when I asked why men don't have any legal right to any help. Thank to Sister Andrea, I now know there are people out there that can help men too."


"I want to say a special thank you to Philippa Forsdike and her family for organising and putting up with us at the weekend, and everyone behind the scenes who helped with the organising and fundraising. The atmosphere at the conference was spell-binding and I’m so glad we had the opportunity to attend such a life changing event!

I was pleasantly surprised to find so many young people pulled together from all over the British Isles and even further in some cases! One group of talented musicians, dancers and singers had come all the way especially from Spain, showing off their talents at Saturday night’s talent show and landing themselves with the first prize. It was nice to meet people of similar ages and share serious opinions and experiences on the topic of pro-life. It created an unbreakable sense of unity and friendship between us all. “Maybe I’m not alone in this struggle after all?!”

The speakers were extremely passionate and well versed in their subjects, making it a very stimulating and enlightening experience for everyone there. The variety of different ‘walks of life’ that were evident in the personalities of the speakers really shocked me. We had religious leaders, doctors, a feminist, a journalist, an economist and a scientist; to say a few.

There was so much up for discussion that I had never even contemplated; I still can’t believe how much I’ve learnt from the conference. I went with a small exercise book, with the intention of taking a few key notes, and I managed to fill the entire book! It has opened my mind to a whole new approach to pro-life and everything it stands to protect and defend.

Thank you again to everyone involved who helped us go!! I really mean it. Without your hard work and support, the youth group leaders and I wouldn’t have been able to attend this life changing experience. Please find attached, a photo of me with the other youth leaders at the SPUC youth conference. Thank you."


"Worthy of a Geneva setting and the attentions of a universal media bandwagon, the National Pro-life youth conference had to make do with the drizzly comforts of a hotel on the isolated outskirts of Rotheram. Represented by a host of weary arrivals from across the UK and as far a field as Spain and the Faeroe Islands, the pro-life movement was alive and kicking from the moment of signing in. Ice breakers of plucky individuals attempting their grasp of Spanish or trying to pin point the Faeroe Islands on the map made for a relaxed environment with everyone ultimately sharing the single desire to defend the sanctity of life.

The weekend proved an education and a test for a promising generation of medical students in attendance. For every despair we faced in subject matter we gained the insightful knowledge and motivation needed to fight it's grasp on our society. The horrors of what we are fighting were interspersed by lighter, joyful moments of images of children dancing in the womb, and an abundant lack of shame on show at the 'SPUC's got talent' evening.

The most promising aspect of the weekend which was highlighted during the workshops were the intelligent and thought provoking questions posed by the youth. They are no mugs and refreshingly they will take this world to task. Much of the fact presented spoke for itself, as well as to the hearts and minds of every receptive person.

As someone once said 'society is based on the assumption that everyone is alike and no one is alive'.

The revelation from one Bristol pro-life group that their pro-choice counterparts refused even to debate was understood when confronted by the concise, logical fervor of speakers such as Fiorella Nash, Lynette Burrows and Sister Andrea, to name but a few. Such was the relish, composure and compassion that met every challenging argument of the pro choice stance by the conferences speakers, that I truly began to fear for our opponents. Cornered by Ms Burrows at one point I found myself being pressed on the topic of abortion, "Life is for living don't you think?" I stated trying to appear profound and steer the conversation back to comfortable ground. Her reply simple and succinct summed up the weekend "It's hard to know what else one would do with it".