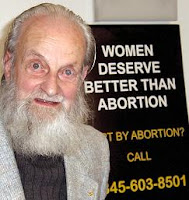 At an SPUC meeting on Wednesday in Bedford, I had the pleasure of meeting Mr Dudley Orman, aged 87, who has lived much of his life in the town. He has a track-record of more than 40 years in campaigning for the pro-life cause.

When abortion looked likely to be legalised in the 1960s, Mr Orman put pro-life placards on his bicycle and motorcycle. He recalls an SPUC rally in Hyde Park, London, which was attended by 100,000 people, including himself and his sister. The meeting was addressed by members of parliament and, afterwards, he was among those carrying a banner in a march. Mr Orman later became a member of the committee of the Bedford branch of Life.

Mr Orman has been secretary of the Bedfordshire group of Amnesty International, and raised the matter of abortion and human rights at a major meeting of the organisation some 30 years ago. He says that half of the audience supported his pro-life position while half disagreed. He regrets recent moves to change Amnesty's neutral policy on abortion to one which supports it, saying that abortion is a human rights issue just as much as false imprisonment.

Mr Orman says his pro-life views are motivated by his religious beliefs. He converted aged 17, initially attending the Catholic church and Jehovah's Witnesses, and currently going to Seventh Day Adventist and Pentecostal services.

He is a keen and frequently published correspondent with the county's local newspapers and says it is important to keep the abortion issue in the public eye. He has also often written Mr Patrick Hall, his town's MP. Sadly, Mr Hall does not agree with the pro-life position. "He won't budge," says Mr Orman, "but I'll keep trying to persuade him."

Mr Orman has taken part in most of the Pro-Life Chains held in Bedford over the past 12 years. SPUC supporters stand alongside a main road holding placards which remind passers-by of the tragedy of abortion and publicise a helpline for people affected by abortion.

After last year's demonstration, he put his placard in an upstairs window. It says: "Abortion hurts women and kills children." Sadly, someone threw a stone at the window and broke it, though no-one was hurt. Mr Orman says: "I feel sorry for the person who threw that stone. I'm not bitter. I just hope they come one day to see that abortion is wrong."

Although the local press did not take a picture of the damage, the house, with Mr Orman's placard, featured on an auctioneer's website and was thus visible worldwide. He recalled the words of William Cowper's hymn: "God moves in a mysterious way/His wonders to perform."

Mr Orman says he intends to carry on fighting the pro-life fight for as long as he is able, hopefully attending next year's Pro-Life Chain and keeping the issue otherwise in the public eye. It is on such dedication that SPUC was founded and it is thanks to campaigners like Mr Dudley Orman of Bedford that we shall be able to continue our work.
at 16:06