Taking the pro-life battle around the country 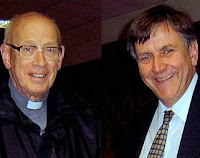 Rt Rev Ambrose Griffiths OSB, former Catholic Bishop of Hexham and Newcastle, attended a meeting at which I spoke in Lancashire on Monday evening. He was joined by several other clergy, both Catholic and Anglican, in an enthusiastic audience of 65 people.

Last night was the second in a series of public meetings about how we must strengthen the pro-life battle in Britain and Northern Ireland. We were at the Fox Lane Sports Club, Leyland, and the event was masterfully organised by Mr David Newton who lives in the town. We hope to found an SPUC branch there.

My hour-long talk, after which I took questions, included dire warnings about the abortion-related amendments to the government's Human Fertilisation and Embryology Bill which returns to the House of Commons next month. These measures would further liberalise Britain's abortion regime, perhaps even extending it to Northern Ireland.

I urged those present to write to their MPs and to Mr Gordon Brown, the prime minister, to oppose these amendments. If they are debated, we want MPs to oppose them (and in fact the whole bill) because they could produce the worst development of the Abortion Act since 1990.

Last Wednesday (10 September) I gave a similar talk to around 100 people (again including clergy) at St Patrick's Catholic parish, Newport, Gwent. A coachload of people had come down from the valleys and others came from Cardiff. Fr Brian Cuddihy IC, parish priest, attended the meeting which was convened by Norman Plaisted, chairman of the town's SPUC branch.

These meetings are well-attended, I think, because people are worried that something terribly wrong is happening in the country. I hear concerns at how, through the Connexions scheme, schools in England have become part of the abortion-establishment. Children in England under the age of consent can be referred for abortion and given abortifacient drugs and devices, even in faith schools. Parents aren't even told, let alone asked for their agreement.

My next meeting in the series will be in Rotherham at 7.30 pm tomorrow-week (Wednesday 24 September) in Blessed Trinity church hall, Northfield Lane, Wickersley, S66 2HF. The organisers are Michael and Sally Hill, our keen supporters in that South Yorkshire town, and they can be called on (01709) 547307.

As I was preparing in an ante-room for the Newport meeting, I overheard a conversation between two local ladies. One of them was about to visit an elderly woman who needed help with some sewing she was doing. It struck me as remarkable that, while some members of our society are engaged in practical works of charity for others, there are people intent on bringing abortion to children in schools.
at 16:52