Anglican leader speaks out on abortion 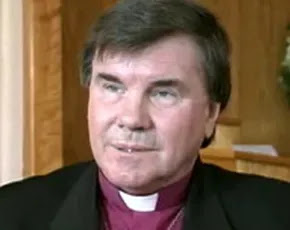 Fr John Fleming has drawn my attention to a letter on abortion by Archbishop John Hepworth (pictured), the primate of the Traditional Anglican Communion, in The Messenger Journal.

It powerfully states both Christian opposition to abortion and Christian love for those who have had an abortion. Amongst other things, the archbishop says:


"Let us be quite clear about this. To procure the death of an unborn child is a heinous crime against the most defenceless person. It is of its very nature so deeply sinful that is severs the relationship with God. Like the first humans, who turned their backs on the source of goodness and truth, and chose to hide from God, it is a sin that drives a person from the Garden of God. As of old, the gates of Paradise are shut, and we are powerless to open them and let ourselves in. Only the Son of God had that power, and He only succeeded after a titanic and brutal battle with the powers of darkness, in which the Cross was his weapon. In so many parts of today's Church, the awesome reality of sin has been lost. In almost every part of the world, the destruction of unborn life is argued over as if it were a policy debate of government. But it is a matter with consequences in eternity, as well as brutal consequences for our own world, as the once Christian nations depopulate an entire generation.

"In new ways, in the artificial creation of embryos for research and pharmaceutical manufacturing, we are extending the frontiers of risk to the unborn. And Christians are losing the battle in our parliaments and bureaucracies in almost every place. And from the Holy Father down to the merest person who dares to stand in defiance, ridicule is heaped on the defenders of life.

"Our task is made more difficult by the love we owe to those who are driven to abortion. Jesus clearly told those who stood with stones ready to only begin the execution of the woman before Him if they were without sin. They dropped their stones, one by one, and slunk off. The woman He commanded to 'sin no more'. So must we drop the stones, and show the love of a Christian people to those who have been driven to do evil by a world that puts a higher value on convenience and appearances and finances than on life. For men whose power forces women to abortion, a deeper alienation from God lies in wait."

You can read the full letter here.