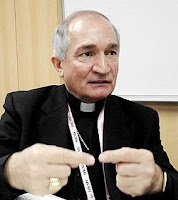 Last month I wrote about how UN officials are trying to promote a universal right to abortion. They are doing so while purporting to utilize a human rights approach to Millenium Development Goal 5 - improving maternal health. The Millenium Development Goals are eight international development goals that all 192 United Nations member states and at least 23 international organizations have agreed to achieve by the year 2015.

The pro-abortion lobby claims that legal abortions are needed to reduce the maternal mortality rate. Last month the UN Human Rights Council in Geneva debated a report produced by Navanethem Pillay, the High Commissioner on Human Rights. The report cites so called “unsafe abortion” as one of the major causes of maternal mortality. It was based on the World Health Organisation statistics, which have been shown to be wildly inaccurate.

SPUC's planned intervention shows that the report's claim that "65,000 to 70,000" maternal deaths were due to unsafe abortions is inaccurate because:
Legalised abortion leads to more abortions. In developing countries, where the maternal mortality rate is highest, abortions are even more dangerous because of poor general health care of women - particularly lack of antibiotics, drugs to prevent hemorrhage and lack of clean facilities.

Unfortunately, the UN is being dominated by groups and individuals ideologically promoting abortion, rather than focusing on genuine ways to save women's lives. The debate in Geneva last month was carefully stage-managed with both the Holy See and the Society for the Protection of Unborn Children (SPUC), the only pro-life NGO present at the Session, excluded from making an intervention.

Provision was made for the Holy See, and other delegations who did not get an opportunity to intervene, to publish their interventions on the UN website.

Patrick Buckley, SPUC's lobbyist at the UN, has said:


There is no doubt about it, a statement made in the plenary with everyone present is much more effective particularly when it is challenging some of the basic precepts that are being pushed by the other side. If there is no voice speaking out against it then the impression is that everyone agrees.

There is also less likelihood of people accessing the website afterwards although some do.  The best way for the Holy See to get their views out there is to do what they are doing, having submitted the text then publishing it as far and wide as possible.

Despite the fact that they did not get to make the statement on the day they are doing their utmost, not just to put their views on the record, but to make them known as widely as possible.

With the same interest in mind I encourage you to read the Holy See's planned intervention. It was prepared by Archbishop Silvano Tomasi (pictured top right), the Papal Nuncio to the UN in Geneva. The intervention points out various measures to improve global maternal health:
The Holy See is proposing real measures to reduce maternal mortality rates. At present this voice of reason is being sidelined in the UN in favour of a radically pro-abortion ideology with the aim of creating a universal right to abortion in the name of improving maternal health.

The reality is that abortion does nothing to improve maternal health.

It is important to spread the message that the Holy See attempted to make so forcefully.