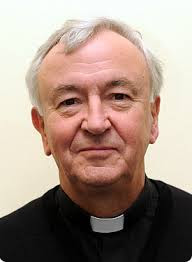 Earlier this month I reported that Archbishop Nichols (pictured) had an exchange on Catholic teaching and gay unions during an interview on BBC's Hardtalk (Friday, 2nd July).


"Some of their vicars are also prepared to sanction gay unions. That church is showing flexibility. Is the Catholic church not going to have to do the same eventually?"

To which the archbishop replied:

Archbishop Nichols's politically-correct response, of course, utterly betrays both Catholic and non-Catholic parents striving to pass on the culture of life to their children, especially in the light of Pope John Paul II's teaching that it is "an illusion to think that we could build a true culture of human life if we did not offer adolescents and young adults an authentic education in sexuality, and in love, and the whole of life according to their true meaning and in their close interconnection." (Evangelium Vitae, 97)

However, I do congratulate him on his prescience politically.

And only yesterday, Barack Obama, the US president, commented on the UN's accreditation of the International Lesbian and Gay Human Rights Commission (ILGHRC) as follows:


"I welcome this important step forward for human rights, as the  International Lesbian and Gay Human Rights Commission (ILGHRC) will take its rightful seat at the table of the United Nations. The UN was founded on the premise that only through mutual respect, diversity, and dialogue can the international community effectively pursue justice and equality.  Today, with the more full inclusion of the International Lesbian and Gay Human Rights Commission, the United Nations is closer to the ideals on which it was founded, and to values of inclusion and equality to which the United States is deeply committed."


"We advocate for the elimination of discriminatory laws, policies and practices, such as sodomy laws ... "


"Representatives from our staff were among those who helped develop the Yogyakarta Principles—a set of principles derived from existing law and jurisprudence, articulating how international human rights law applies to sexual orientation and gender identity."

I have commented before about the Yogyakarta principles which, according to one leading expert, represent "a deliberate attempt to manipulate our understanding of ‘Human Rights’ in order to promote the self-serving social agenda of a small cluster of vociferous and politically well-connected advocacy groups".

I said in my post earlier this month regarding Archbishop Nichols's interview, that Pope Benedict is being shepherded into a politically correct broad church in England - and, I might add, one that's being led with remarkable political prescience as well as correctness.