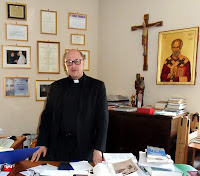 In my work for the SPUC I am privileged to meet people of all faiths and backgrounds who are working to defend the sanctity of human life.

Here are a few questions I put to Monsignor Barreiro - and his forthright replies offering a distinctively Catholic analysis of the challenges facing the pro-life movement:


JS: What, as a priest, drew you to work in the pro-life movement?

IB: From the beginning of my priesthood in 1987 I was very much concerned with how much the contraceptive mentality has been accepted by regular church-goers. After receiving an excellent formation on moral theology from Msgr. William Smith at St. Joseph’s Seminary in the Archdiocese of New York, I was surprised to see how little the faithful knew about the teachings of the Church on generosity with life and how rarely the Encyclical Humanae Vitae was mentioned in Church. If there is a contraceptive mentality then what happens is that when contraception fails, the next step is to make recourse to abortion to avoid an undesired pregnancy. After contraception and abortion are accepted all sort of monstrosities follow, like euthanasia and  so-called homosexual marriage.

JS: What is the role of the Rome Office of Human Life International?

IB: The Rome Office of HLI has three main areas of activity:
1. To present information to the Holy See on matters concerning life and family. We also assist pro-lifers worldwide to present their concerns in Rome.
2. To assist in the formation on life and family issues of the thousands of seminarians and young priests from all over the world who are doing their studies at Roman Universities. For that reason we have built a growing specialized library that soon will reach more than six thousand catalogued volumes plus a sizeable collection of academic magazines.
3. To carry out a pro-life apostolate in Italy. We have been active in many campaigns and we have spoken at many conferences in this country.

JS: What is the greatest challenge facing defenders of human life today?

IB: The greatest challenge that we are facing today is that Faith is becoming watered down. It is true that some will defend life in an integral way from a natural law perspective, but we have to be realistic: most of the dedicated apostles of life base their struggle on their Faith. In his first homily during his visit to Portugal the Holy Father stated “Often we are anxiously preoccupied with the social, cultural and political consequences of the faith, taking for granted that faith is present, which unfortunately is less and less realistic.” (Benedict XVI, Homily in Terreiro do Paço of Lisbon, Tuesday, 11 May 2010) Analyzing the actions in the twentieth century of political leaders who considered themselves Christians we will find a perplexing lack of coherence between the faith they claimed to have had and their political actions. It is evident that these unfaithful Catholics have to be made accountable for their actions. But considering the realistic assessment of the Holy Father, the main question for us and for the future, is not how much Christians are coherent with their faith, but to what extent that faith really exists. So then our main challenge is to try to build again the Faith after the terrible crisis that the Faith of many within the Church has suffered in the second half of the twentieth century. It is only through the restoration of the Faith and the Sacred Liturgy that we will be able to build again an integral culture of life. Nobody lives and dies on behalf of a watered-down Christianity that is ready to make compromises with the world. So we have to live and preach the Faith in its integrity, in full continuity with the constant magisterium of the Church and without any compromises with the world. I am not saying anything new here, that was the message that I delivered in my talk on November 22nd at the London Oratory on, the role of the priest in promoting the Gospel of Life.