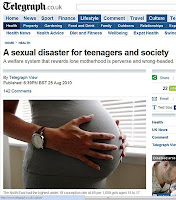 On Wednesday The Telegraph published an amazingly strong leading article on sex education. Here is a flavour of its line of argument:


"The last government spent £300 million on its Teenage Pregnancy Strategy, [yet the latest] data confirm[s] this country’s unassailable position as Europe’s trailblazer in sexual irresponsibility."

"This is a failure of policy on an epic scale, the result of a 13-year social experiment that has proved an unmitigated disaster. Labour ... channell[ed] all its energies and money into sex education programmes of dubious worth, while making contraception freely available – frequently without the knowledge of parents – to girls who were often under the age of consent. Ministers and officials reacted with horror to any suggestion that moral issues might come into play, while the notion of abstinence campaigns, widely deployed in the US, was greeted with contempt."

"There is strong evidence that the most effective method of reducing teenage pregnancies is not sex education, but the improvement of general education standards ... [P]arents must be part of the process, not kept in ignorance: evidence from America shows that their involvement helps to reduce teenage pregnancy rates."

"The Coalition has the opportunity to turn the tide ...[This] requires our political leaders not to shy away from taking a clear moral stand, and proclaiming the value and virtue of family life."

Yet, in the unlikely event that the Coalition does a volte-face from Labour's strategy, will such a change be supported by the Catholic bishops' conference of England and Wales? The Catholic Education Service (CES), an organ of the bishop's conference, welcomed and helped draft radical anti-life/anti-family sex and relationships guidance during the previous administration. Archbishop Vincent Nichols of Westminster has made clear his support for the prevailing ideology on sex and relationships education, and defended the CES's appointment of Greg Pope, a former Labour MP with a lengthy anti-life/anti-family record.

Daphne McLeod, who leads Pro Ecclesia et Pontifice, has told LifeSiteNews.com about conversations she has had with Archbishop Nichols regarding the bishops' conference ties with groups promoting a homosexual agenda.* According to LifeSiteNews.com, Miss McLeod said that he


‘We must have unity at all price. If I speak out against it, there’ll be disunity among the bishops, and we can’t have that’.”

*The late Pope John Paul II, the great pro-life champion, taught in paragraph 97 of his 1995 encyclical Evangelium Vitae that it is an illusion to think that we can build a true culture of human life if we do not offer adolescents and young adults an authentic education in sexuality, and in love, and the whole of life according to their true meaning and in their close interconnection.

Comments on this blog? Email them to johnsmeaton@spuc.org.uk
Sign up for alerts to new blog-posts and/or for SPUC's other email services
Follow SPUC on Twitter
Join SPUC's Facebook group
Please support SPUC. Please donate, join, and/or leave a legacy
at 17:57