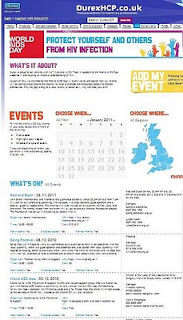 As if to reinforce my concerns, I see that Durex, the makers of barrier contraceptives, have advertised one of those Soho Masses, taking place last month, on their website for healthcare professionals.

What's so deeply shocking about the Durex advert for the Mass in Soho is the further evidence it provides of episcopal betrayal - the tragic betrayal of young people and Catholic families by Archbishop Nichols and his failure to give clear witness to the the truth on this matter and related matters. The late Pope John Paul II, the great pro-life champion, taught (Evangelium Vitae, 1995, para.97) it is an illusion to think that we can build a true culture of human life if we do not offer adolescents and young adults an authentic education in sexuality, and in love, and the whole of life according to their true meaning and in their close interconnection.

Comments on this blog? Email them to johnsmeaton@spuc.org.uk
Sign up for alerts to new blog-posts and/or for SPUC's other email services
Follow SPUC on Twitter
Join SPUC's Facebook group
Please support SPUC. Please donate, join, and/or leave a legacy
at 17:06