I have a special Easter message for all my visitors: Please leaflet the street where you live - and pray - to defeat the British government's plans to legalise same-sex marriage.

SPUC, in common with Anglican Mainstream, Catholic Church leaders in England and Wales, Family and Youth Concern, and other bodies, is working with the Coalition for Marriage (C4M) to oppose the British government’s plans to legalise same-sex marriage.*

The C4M has launched a petition which may have already been promoted in your local area, probably through local churches. It’s vital that the petition is a huge success. Let me know if you would further copies of the C4M petition or a poster.

In order to defend real marriage successfully, we urgently need to reach everyone in the community. A copy of the new SPUC flyer on real marriage is reproduced below. Would it be possible for you to order copies of this flyer from SPUC and to give it out in the street where you live where you live or in a neighbouring street?


“The Government [has] launched its consultation on redefining marriage. Equalities minister Lynne Featherstone said she was determined to change marriage whether the public likes it or not”.

The SPUC flyer urges members of the public to obtain and sign the C4M petition – and it urges them to respond to the government consultation.

If, in addition, to giving out flyers in the street where you live, or in a neighbouring street, you’re in a position to organize a team of people to do the same thing – however small a team that may be – please let me know.

Write to me at johnsmeaton@spuc.org.uk so that I can send you the number of leaflets you require. You can also ask me for SPUC’s briefing on responding to the government’s consultation on same-sex marriage.

At my own local SPUC branch, SPUC Harrow, we have agreed to undertake a street by street door-to-door leafleting campaign. Colleen Wallace, one of our supporters, is a Catholic and she urged all Catholics present at the meeting to commit themselves to an hour's Adoration of the Blessed Sacrament a week in support of this project. As a Catholic myself, I have agreed to do this. Any Catholic readers of my blog wishing to respond to Colleen Wallace's call, let me know, so that I can pass on news of your commitment to Colleen. 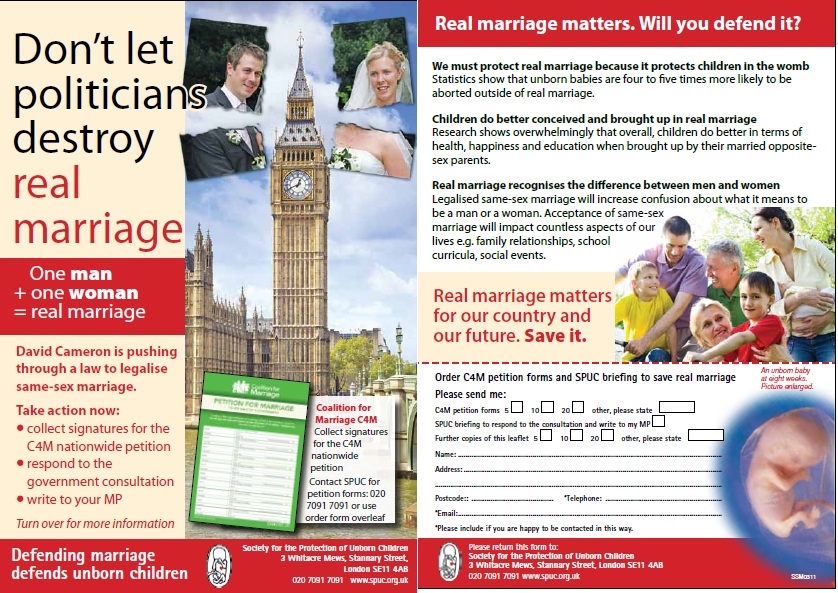 *Marriage as an institution protects children, both born and unborn. Statistics show that unborn children are much safer within marriage than outside marriage. For more information see SPUC's position paper and background paper on same-sex marriage.